SANUSI REFUSES TO BACK DOWN 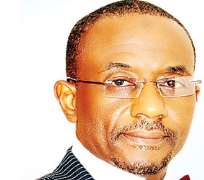 CBN Governor, Lamido Sanusi
The Governor of the Central Bank of Nigeria, Mr. Lamido Sanusi, remained adamant on Tuesday over his statement that 25 per cent of the Federal Government's budget overhead was spent on the National Assembly.

Sanusi, who appeared before the House of Representatives joint committees on appropriation, finance, banking/currency and drugs/narcotics and financial crimes, said he was convinced that the figure he gave was correct.

He repeated virtually the same defence he had put up earlier when he met with the Senate on Wednesday last week.

The CBN governor said he got his figure from a document from the Office of the Director of Budget, Mr. Bright Okogun, and it was the same document that the Federal Government used in preparing the 2011-2013 Medium Term Expenditure it sent to the National Assembly two weeks ago.

'I remain convinced that the figure I used, based on the most authentic source that I have, is correct', Sanusi insisted.

According to him, the figure he used as total Federal Government overhead is N536bn, out of which the National Assembly's share is N136bn.

Sanusi had stated the figure at the eight convocation of the Igbinedion University, Okada, Edo State last month, where he delivered the convocation lecture.

He told the committee that if there were other figures, which the DG budget office did not make available to him, the office should take the responsibility of making the necessary clarification(s).

The CBN governor made the comment after the committee established that there were three conflicting figures on Federal Government's overhead in 2010.

Sanusi also presented some documents to the committee . The members, after going through them (documents), observed that one of them contained a separate N814bn, a figure different from the N536bn that Sanusi said he got from the budget office.

Similarly, the Minority Leader of the House, Alhaji Mohammed Ndume, who moderated the session, observed that the total government overhead in the initial 2010 Appropriation Act and the two subsequent supplementary budgets was N1.3tn.

Ndume added that the implication was that the National Assembly's share (N136bn) was around 8.9 per cent and not 25 per cent.

He also said that if the aggregate total of the 2010 budget (about N5tn) was used, the share of the National Assembly would be three per cent.

The lawmaker added that since one of Sanusi's documents showed another figure of N814bn, 'it means that the percentage of the National Assembly should be lower than what the CBN governor quoted.'

The committee accused Sanusi of using a 'political figure' to tarnish the image of the National Assembly.

When Sanusi tried to explain how he came about the N814bn, he was overruled by the committee. But the CBN governor went on to deny that he had a political motive in making his statement.

Sanusi, who admitted to having a cordial relationship with the National Assembly, wondered why many Nigerians were often embittered whenever they were told the truth.

He said he had made a reference to the 25 per cent expenditure during his lecture at the Igbinedion University not because he wanted to malign the National Assembly, as portrayed in some quarters.

Sanusi added that his statement was not in any way aimed at ridiculing the National Assembly, as it involved all other sectors of the economy.

'There are times in the course of our work when we have to say things that may not be pleasant. Every time we say things that people are not happy with, they take it as an attempt to malign them.

'I believe it is extremely important for the CBN to express its opinion, it should not be taken as an insult or attack. I was speaking about the growth prospect of the Nigerian economy. I spoke about the structure of government finance.

'More and more of our money is being spent on overheads, unless we widen our revenue base, we will continue to use our money to service debt.

'As a country, we cannot continue to spend our money on recurrent expenditure, especially when we are borrowing.''

He disclosed how he had once been summoned by 'Mr. President' after he had made a comment that Nigeria was pursuing the wrong economic agenda.

He revealed that when he appeared before the President, he admitted that he made the statement.

Sanusi said he told the President that there was no way the economy would make a headway if the country did not find a solution to the problem of power.

'The President said 'yes', I agree with you', he added.

Sanusi held the view that the media blew the matter out of proportion by harping on the National Assembly overhead, thereby making the real focus of his lecture secondary.

When asked whether based on the three conflicting figures that had been established, he still believed that he was correct, Sanusi replied, 'Was the number right based on the fact that I had? I say yes.'

Sanusi said what was not in doubt was the fact that the country was spending heavily on recurrent expenditure.

He recalled that in 2009, about 20 per cent of the national revenue was used to service domestic debts spent on overhead.

In 2010, Sanusi disclosed that the percentage jumped to 26 per cent, an indication that it would rise again in 2011.

'Increasing overheads lead to pressure on inflation and we at the CBN have a challenge of stabilising the system, especially the interest rates', he added.

Sanusi cited the case of the N500bn the government spends on fuel subsidy, adding that it was not healthy for Nigeria to engage in borrowing just to spend on subsidising fuel importation.

The session came to an abrupt end after the committees established that there were three( N1.3tn, N814bn and N536bn) conflicting Federal Government overhead figures 'being bandied around.'

'As it is, there is uncertainty over which of the figures is authentic,' said Ndume, who claimed that the committees had invited Okogun to clarify the conflicting figures.

Akogun was not at the session and it was unclear why he did not show up.

Both the committees and Sanusi admitted that the comment of the CBN governor had caused unnecessary controversy.

The Chairman of the Committee on Appropriation, Mr. Ayo Adeseun, advised Sanusi to weigh some of his public utterances because of the sensitive nature of his office.

Though Sanusi described the incident as 'unfortunate', he maintained that 'a modern economy needs an independent CBN, which must be allowed to express its views.'

Details of the document Sanusi presented to the committee showed that the N814bn he quoted was on 'recurrent', not overhead expenditure.

Recurrent is larger than overhead, which is a component of the recurrent expenditure.

Meanwhile, the Chairman of IRS Airlines, Alhaji Isyaku Rabiu, has expressed worry that National Assembly members think more about their welfare than their primary responsibility of lawmaking.

'The present crop of office -holders only think about their own welfare as could be seen in the attitude of some members of the National Assembly,' said Rabiu at the unveiling of Nigerian Youth Connect in Abuja.

He challenged youths in the country to ensure that they voted only creditable persons into public offices during the 2011 elections.