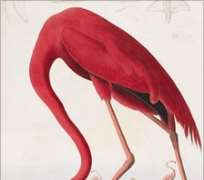 http://www.nigerianbestforum.com/blog/wp-content/uploads/2010/12/49038778_audubonsbirdsofamerica2.jpg Only 119 complete copies of The Birds of America are known to exist

A rare copy of John James Audubon's Birds of America, billed as the world's most expensive book, has sold for more than £7m at auction.

The copy, which comes from the collection of Lord Hesketh, had been expected to fetch up to £6m.

Only 119 complete copies of the 19th-century book are known to exist, and 108 are owned by museums and libraries.

A separate edition of the book on ornithology sold for a record-breaking price of $8.8m (£5.7m) a decade ago.

He did so by travelling across America, shooting the birds and then hanging them on bits of wire to paint them.

The artist then went to Britain to print the volumes and targeted the rich to buy copies.

London dealer Michael Tollemache, who bought the copy at the Sotheby's auction, said the book was “priceless”.

Lord Hesketh's collection also included a rare copy of Shakespeare's First Folio, which Sotheby's said was “the most important book in all of English Literature”.

Of the 750 that were probably printed, only 219 are known to exist today.

It is one of only three textually complete copies to exist in private hands in a comparably early binding.