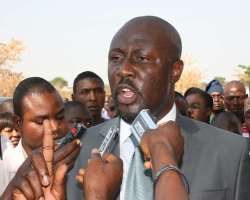 ABUJA, Dec 07, (THEWILL) - The five members of the House of Representatives ordered by an Abuja High Court to be reinstated were today barred by a team of policemen from entering the National Assembly complex.

Dino Melaye, leader of the ‘Progressives’ had led his four colleagues at about 10 am to the National Assembly gate to resume their legislative assignments in line with the ruling of the High Court but met stiff opposition from the security men made up of the police and National Assembly Civil Security.

The Progressives were suspended on June 22, this year for violating House Rules and Standing Orders but five of them went to court to challenge the action. The court finally ruled on Dec. 2, 2010 in their favour. The five members had come in company of a bailiff to enforce the judgement. But a team of policemen who were already on alert quickly stopped the Toyota Hilux and its occupants from entering the National Assembly right from the first gate.

The Policemen, led by the CSP M.D. Shehu and the Sergeant-At-Arms, Col. Emeka Okere (rtd), insisted that the lawmakers would not be granted entry, based on the orders from the authorities of the National Assembly. This elicited anger from the group, who persistently questioned the “integrity and neutrality” of the security personnel in the case. But the sergeant-at-arms, while asking the raging lawmakers to vacate the scene, insisted that he must be served the Court judgment along with other National Assembly authorities.

Clad in grey suit with a navy blue tie, Dino disparaged the House leadership for violating a “Court Process”, forcefully broke the cordon and walked the distance from the first gate to the last gate before the National Assembly. Kaze and Adamu had also succeeded in passing through the first gate before they were stopped and walked out. Bitrus was dressed in a dark brown French suit with Adamu spotting a light brown ‘agbada’ and were escorted out of the gate. While speaking to the press, Melaye submitted that the House had no superior judgment or stay of execution that should stop them from entering the complex.

According to Okere, “In the first place, I (Sergeant-At-Arms) has not been served the Court Judgment”, but Dino and Awhinawhi, queried him “Were you joined in the case, why should you be served? Dino told Okere that, “We have a judgment they don’t have a superior judgment, they don’t have a stay of execution, yet they are stooping us from entering by using the police to obstruct justice.

“They are using the Nigeria Police to stop us from going into the chamber. If they know they have a case, we are supposed to be respecter of the constitution and the courts of this land. If they serve me a superior order that supersedes what I have, I will go back home,” he said. He expressed shock at the attitude of the security officials who refused them entry into the complex.

“They barricaded the gate and stopped us from going in, when we have an order, we came with the court bailiff who showed them the documents but they ignored it that they have an order from the House leadership to disallow me and my group from going in.

“We are going to fight to the end. We will go into the chamber, we have the court order,” he said. But reacting to the development, spokesman of the House, Hon. Eseme Eyiboh (PDP, Akwa Ibom), said that the House had served a motion and notice of appeal against the ruling of the court that ordered the reinstatement of the five lawmakers.

He said the attempt by Melaye and his group to enter the National Assembly was a ‘violation of court process’.

“Once there is a notice of appeal or stay of execution, both sides must comply with status quo,” he said.

Eseme explained that, “On the 2 of December, the Abuja High Court gave a judgment to the effect that they should resume on the basis of the process of the law and I understand too from some of you that some of them made attempts yesterday to come and resume, which of course as a matter of fact, must be known to you that that attempt was a violation of the court process. “On the 3rd of December, the legal representation of the National Assembly filed in a motion for stay of execution and also filed a notice of appeal. And there is a locus classical by the Supreme Court in the issue of the Vaswani Brothers clearly that during the tenancy of a case on appeal that no person can take further steps to actualize the issue of the execution of the judgment. “And if that judgment is executed, the rest are going to be reserved. So, it is always in the interest of justice and the process of. So the basis of the gentlemen coming to resume does not arise because there is a motion on notice of appeal and stay of execution.”