AS THE NORTH NAMES ATIKU 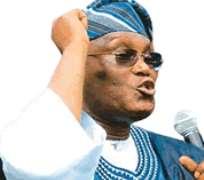 Atiku
Finally, the northern wise men have made their choice of the politician who will represent the region in the PDP presidential primaries: former Vice President Atiku Abubakar. It is now a two-horse race, between Goodluck Jonathan and Atiku Abubakar. It promises to be the most exciting race in the entire presidential field, something like the final before the final.

The wise men had to choose from a strong field that included Ibrahim Babangida, Aliyu Gusau and Bukola Saraki. It took them four months of painstaking consultation across the entire North. They talked to politicians, Emirs, Chiefs, ordinary people. It was something of a referendum: in the end the people of the North chose the most trusted man: Atiku Abubakar, who is an experienced veteran of many wars.

Indeed, the battle with Jonathan for the PDP presidential nomination in January will be the nearest equivalent of a full scale war. President Jonathan will deploy the power of incumbency as the sitting president and leader of the party, against the intense experience and know-how of Atiku, who was one of the founders of the party. Atiku knows all the ropes; he is an expert in political trench warfare.

The president's spokesman, Ima Niboro, immediately reacted to the announcement of Atiku by giving the impression that the contest would be a walk over for his boss. Well, they have a few surprises coming their way.

Jonathan has never run an election before. He is the only president in the history of democratic Nigeria who has risen to power without winning an election. He is coming against a man who has formidable credentials in election victories.

Niboro should begin by asking himself: How did Atiku survive Obasanjo's rage and vindictive attack? How did he survive the strong challenge of Babangida, Gusau and Saraki?

Atiku's greatest political weapon is his ability to be underrated. His infectious smile, quiet humanity and willingness to turn the other cheek have been mistaken for weakness and timidity. But the cobra is often like that. The speed of Jonathan camp's reaction to Atiku actually betrays their fear. They wish it had not been Atiku. Now, they are not quite sure how the battle for delegates, indeed, also for the soul of the party will go.

Atiku is going into the delegates' battle with the added strength of Babangida, Gusau and Saraki, all of who not only conceded defeat, but have pledged to work for Atiku's success. They are placing the political future of their region squarely on the shoulders of Atiku. They know he can carry the weight. In any democratic presidential election such as we are about to organize in Nigeria, there are usually three key parameters that determine which candidate wins.

They are: The policies and issues that address the concerns of multiplied millions of Nigerians; the track record and electability of the candidate; the competence of the candidate's campaign staff.

The fourth parameter, which should not have anything to do directly with the candidate but which he may try to control, especially if the candidate is a sitting President, is the actual conduct of the election by the supposedly neutral umpire, the Independent National Electoral Commission – INEC. The principle of who pays the piper dictates the music is relevant today as it was when Obasanjo used his total control of the party and the Maurice Iwu led INEC leadership, to stage the worst rigged presidential election in Nigeria's history.

Even Umaru Yar'Adua, who became the president by that rigged process, admitted that the election had been seriously flawed. But he accepted the sham result anyway, because it had made him the president.

Evidences were produced by the petitioners at the tribunal that the result of the 2007 election had been written and signed by Maurice Iwu long before the election took place. That alone should have been grounds enough to cancel the entire presidential election, and those involved in that criminal act prosecuted. But to the amazement of the world, the Justice Ogebe tribunal said it was not substantial ground to cancel the election

Not to talk of ballot papers that had no numbers, thereby making it impossible to know how many votes were actually cast. It was also of no consequence that ballot papers to be used in Nigeria were still sitting in warehouses in South Africa, where they had been printed, on the day of the election. It is wrong for President Jonathan to be the chief umpire in his own race. It is against the rule of every game. But Jonathan has come to the race (for which he is not qualified) by the controversial circumstances of the zoning policy of the party. He has been trying to destroy that policy.

President Jonathan handpicked the new chairman of INEC, Professor Attahiru Jega. While Jega's personal integrity is not in question, it is nevertheless fair to say that he will be listening to, perhaps taking orders from, his benefactor on a fairly consistent basis. The professor says he can't be manipulated. That remains to be seen. After all, Professor Maurice Iwu made the same claims when he was appointed by Obasanjo. If Jega comes out clean from this election he would enter the Guinness Book of Records and qualify for the Nobel Prize.

We can already see the signs that the President is not going to allow a fair content. His attempt to manipulate the primaries gives serious cause for concern. Millions of Nigerians are praying that Jega would indeed prove to be the exception to the general rule; that he can't be corrupted. There are pertinent questions: How is Jega going to ensure that election officers and materials are not going to arrive at the polling stations at 6:00pm (when the polls close) instead of 8 a.m when the polls open; or not at all. But the RECs would write the results? That's where the rigging takes place.

Now back to the three key parameters for determining the candidate who should win the presidential election. What is of the greatest interest to long suffering Nigerians should be the policies that the candidates will advance to tackle the many things that are not working in Nigeria. What are they going to do about debilitating poverty, power unavailability, worsening economy, etc?

Seven aspirants are so far in the presidential race; two of them in the PDP – Jonathan and Atiku, Buhari (CPC) Nuhu Ribadu and Bugaje (ACN), Shekarau (ANPP). Of all these aspirants, only one, Atiku Abubakar, has clearly articulated the policies he will pursue as President, in a policy document, and presently being advertised every day in the newspapers.

We have not seen any other policy document from the other presidential aspirants, including the President. Why is there no interest in policy matters? Even the media appear not interested. How is the nation going to come out of the woods when no one except Atiku Abubakar is interested in the real problems of Nigeria? On that score Atiku seems the most serious, more organized and more patriotic of all the presidential aspirants. One year ago he was ready – with his plans.

As for track record and electability, Atiku stands out. To begin with, there would not have been a PDP election victory in 1999 without Atiku's contribution. He and his PDM group obtained the PDP victory, which brought Obasanjo to power, and again made possible his reelection in 2003. As the vice president, Atiku was the single most important figure in the coalition he organized, that defeated the Obasanjo third term scheme.

Through the manipulation of Obasanjo and Maurice Iwu, Atiku entered the presidential race in 2007 only 24 hours to the election, but was still awarded third place by Maurice Iwu. If democracy is standing on a strong footing today, it was due in no small measure to the many battles that Atiku fought in the Supreme Court and won all.

Clearly therefore, Atiku Abubakar is the best prepared, the most articulate in this election. No wonder people are defecting from the Jonathan camp to his camp. We should recognize quality when we see one. Atiku is the only presidential aspirant that is addressing the issues. He deserves to be sent to the Villa to work for the people of Nigeria.