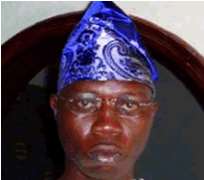 Crisis within the Oyo State chapter of the Oodua Peoples Congress (OPC), the Yoruba Socio-cultural group, has consumed its Coordinator, Mr Ayo Ogundiran, following his removal by the National Leader of the organization, Chief Ganiyu Adams. Ogundiran was sacked over alleged violation of the group's Code of Conduct.

His deputy, Chief Adeola Adeagbo, was named as replacement, in acting capacity. But, speaking with Daily Sun during the week,

Ogundiran insisted he was still the coordinator for the state and that Adeagbo was only acting. According to him, he was only suspended, while the issue that led to his suspension had been resolved.

Daily Sun's investigations also revealed that Ogundiran was removed over his alleged involvement in politics, mismanagement of the organization's fund and failure to attend congress meetings among other charges, said to be at variance with the philosophy and rules of the organisation.

The former coordinator who is a native of Ogbomoso in Oyo State was said to have monopolised the group's structure by putting it in the hands of politicians thereby leaving the over 10,000 members of the organisation in the state astray. His leadership style was also said to have caused more havoc to the organization.

Ogundiran was also accused of mismanaging the sum of N300, 000 meant for members' welfare after a recent congress held in Ibadan. But more grievous among Ogundiran's alleged sins was giving out false information about the situation of things in the state to the national coordinating council of the organization, a situation which eventually forced the disciplinary committee to announce his removal few weeks ago.

But, Ogundiran while speaking with Daily Sun denied being removed as the coordinator, saying, he was only suspended and that he would soon resume his position as the state coordinator. His words: 'I am on suspension and Adeola, my deputy is only acting. I'm coming back to my position. The issue has been settled internally after our leader discovered that all the allegations against me were false and it's very likely I take over by next Tuesday after our National Executive Council meeting that would be coming up in Epe. I'm not a politician. There was no way I could combine politics with the OPC activities.

All these allegations are coming from my home town in Ogbomoso and they have been found to be false. Adeola is only acting, I am coming back to my position. Our leader, Chief Ganiyu Adams has given his words that I would return to the position after the meeting in Epe next week.'

However, another source told Daily Sun, that the school teacher had earlier been suspended in December 2009 and was only reinstated in June 2010, following which a panel was set up to monitor his activities. The panel after three months indicted him of anti-congress activities and a report was submitted to the national secretariat.

Adeagbo who is also the Kekere Akin of Iseyinland, told Daily Sun that as far as he was concerned the former coordinator had been removed by the leadership of the group and he has been directed to take over as coordinator. He stated that his emergence as the state coordinator had been ratified by the national coordinating council led by Gani Adams, adding that he was not even at the congress when he was announced as the coordinator of the organization in the state.

But, the leader of the group; Ganiyu Adams, in a telephone chat with Daily Sun confirmed that all the allegations against the former coordinator were true.