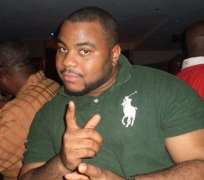 Following the story on the alleged assault and battery of a young lady at the opening of a hangout in Victoria Island, Lagos, by Ugonna Madueke, son of Nigeria's former Chief of Naval Staff, Admiral Alison Maduekwe and step son to Nigeria's current Petroleum minister, Mrs. Diezani Alison- Maduekwe, close pals have called in to insist on his innocence.

According to those who spoke to us , Ugonna did not assault the said lady at the club. Yes, there were issues raised because the lady was trying to get into the space occupied by Ugonna and friends but it was not as bad as was pained. In a phone call on Friday 19 November 2010, one of Ugonna friends told us that the “the lady probably has ulterior motives and when she could not achieve it she decided to be rude and its unfortunate that she fabricated the whole thing as if rocket launchers landed on her. Talking about swollen face and lips, nothing of such happened” insisted the friend who claimed to be an eye witness.

Ugonna, another friend insists is not on any police wanted listed as those involved wanted to believe.He is free as a bird and he has been going about his duties as a citizen of Nigeria.