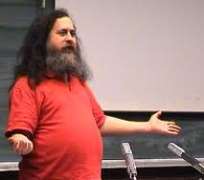 Imagine having the total freedom to run computer software of all sorts “for any purpose” and to “change it to make you do what you wish”?

In a fiery speech at Perth Hyatt this week, American software freedom activist, Richard Stallman(also known as “rms”), said those freedoms, even though possible, are in short supply across the world right now.

According to him, the world is being held in digital handcuffs by software companies like Apple and Microsoft – which keep source codes to themselves but maintain an immoral backdoor on products which they use to disregard personal freedom.

Richard Stallman is both a legend and a maverick in computer software and has held this view for decades.

He is adamantly convinced that when it comes to computers, “people haven't learnt to value freedom – they (more often) choose convenience over freedom.”

For Stallman, that is where the danger lies because the use of computer software as a culture has not been around for very long, and there is a lot of ignorance about how it relates to human rights and social freedom.

In the absence of such understanding, Stallman believes powerful multinational companies hoodwink governments to implement draconian laws that protect selfish interests, suppress freedom, and leave people only the “choice between monopolies.”

Stallman strenuously emphasises that “free software” relates to human freedom, and not “free” as in “free beer.”

The nature of free software, with armies of volunteer programmers means it is often more affordable for majority of people than proprietary software.

In connection with this, he unmasks “open-source software” as not being the same “free software.”

His rejection of open-source also has to do with the fact that he cares a lot about the correct use of terms and references – almost in a way that could come across as petty to the casual observer.

Twenty-seven years ago, Stallman figured out that the only way he could break the “monopolies” of proprietary software was to create an operating system that everyone could use with unprecedented freedom.

He proceeded to launch the GNU Project to create a free unix-like operating system in the early 1980s, and has been the project's lead architect all these decades.

The non-profit corporation Free Software Foundation is another project spearheaded by the free software activist.

Some of the palpable results include the unique GNU General Public License, which provides a legal mechanism to protect modifications and redistribution rights for free software.

Another example is the GNU Emacs editor, believed to contain more useful editing commands than any other in the world.

If you get the chance to listen to Richard Stallman face to face, he makes a strong impression on you with his thoroughly unconventional ways.

At the Perth Hyatt, he got on the podium in his trade-mark red T-shirt with just socks and no shoes – far less than casual.

By most business and presentation standards, he looked wretched.

But he is brilliant in words, his knowledge unquestionable, and it seemed like he is clothed in pure passion for the subject he loves – free software.

Not everyone may choose to listen to Stallman and his views – but many academic institutions have recognised his body of work by decorating him with numerous doctorate degrees.

His message of free software and how it could help developing nations has been embraced in India, a country that regularly churns out IT minds.

For Africa, it is a matter of being late as usual.
What benefits Stallman's free software campaign has for Africa may take that little bit longer to happen – if it ever does.

And we are talking about a global campaign that is decades old.