SANUSI AND THE NATIONAL ASSEMBLY 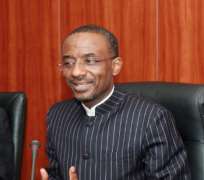 “What’s wrong with these National Assembly members?” “You can ask me again.” “They have hundreds of bills they have not attended to, bills that can affect the lives of the people positively, but they seem to be more interested in using the hallowed chambers of the Nigerian parliament to intimidate and harass people.” “Well, they have just met their match in Lamido Sanusi, the CBN Governor. Lamido is my Man of the Year.” “I beg, don’t start. What are we saying, what are you talking?”

“Why did they summon him in the first place? The guy said the National Assembly consumes 25% of Federal Government overhead. They say it is not true. Then he looks all of them in the eye, and repeats the same statement. And he says, by the way, I don’t really need this your CBN Governor job, it is not my life, so don’t think because I am CBN Governor you can intimidate me. I tell you to your faces: you guys are overpaid and underworked and you pose a threat to good governance in Nigeria.”

“What’s the matter with you? You like to read ethnic meaning into everything. Sanusi was speaking on behalf of all Nigerians. And just in case the lawmakers had not been reading newspapers, he educated them about the source of the statement that riled them. He had given a lecture at a university on growth and inflationary trends in the economy and in one sentence, he had referred to the National Assembly and Federal Government overheads; it wasn’t as if he set out to attack the distinguished and honourable members.”

“Now, you are putting words in his mouth. I watched the entire proceedings on television. The CBN Governor did not use those words: distinguished or honourable.” “Him sef too stubborn. He comments on everything. I have been saying it, windbaggery cannot be part of the functions of a CBN Governor. Why doesn’t he just focus on his monetary policy portfolio.”

“I don’t agree. This country is so rotten that we need all the people who can speak up for us to do so. And in any case, Sanusi commenting on how much is spent on the National Assembly is still doing his job. Is that not a money matter?”

“Well. But come to think of it, these our lawmakers are something else. For making an ordinary comment, a fair comment in my view, the Senators accused Sanusi of treason, and an attempt to arrest democracy. How?” “The Senate President added that continued attack on members of the National Assembly “would no longer be acceptable.”

“Hen, hen, are they planning to pass a law prescribing jail terms for anyone who criticizes members of the National Assembly? Is this no longer a democracy? So, what are they going to do now? Sanusi has called their bluff. He refused to succumb to their intimidation.”

“I watched the thing on television. They tried to bully him. He refused. They told him it is 3.5% and not 25%, still the guy insisted on 25% and quoted the Budget office as the source of his statement. They talked about service-wide votes.”

“Which service-wide votes? A National Assembly that spends N158.2 billion per annum, whose members earn on the average a million naira per day is in my view an overpaid legislature. The National Assembly should give us a breakdown of what it gets, how it shares it and how much in total it is costing Nigerians to maintain it. This kind of controversy would have been unnecessary if there had been transparency in our public finance process.”

“The National Assembly should have issued a rejoinder stating its position, instead of wasting public time and funds organizing a meaningless public inquisition. It was a very ugly show on television, with Senators heckling their own guest. Those guys should be told that free speech is a pillar of democracy.”

“Did you see Sanusi giving the Senators a lecture on what democracy is all about, defending his right to speak as a Nigerian?”

“Serves them right; it was a very bad outing for the National Assembly. The only way to resolve this matter is to publish the full details of what the lawmakers earn. But do you know that Sanusi’s appearance at the National Assembly could have been used to discuss the main substance of his lecture, about the high cost of government and the implications for the economy, but nobody thought of that.”

“Who will think of that? A National Assembly where members of the House of Representatives did not even know that the N6.1 billion Nigerian Communications Commission budget had been passed?”

“Some of them were threatening fire and brimstone, until the Speaker drew their attention to the fact that the matter had in fact been in the record of votes and proceedings of the last session which the House had approved.” “Those members did not read the papers for the session.”

“Precisely. They could have objected to the Nigerian Communications Commission (NCC) budget if they had read the minutes of the last meeting and would have refused to endorse that particular portion; with their folly exposed, some of them started behaving rowdily”

“I understand many of the lawmakers don’t even attend plenary sessions. Sanusi had to tell them, it is not only when you win an election that you can call yourself a democrat.” “I am sure the Senators thought Sanusi would come there, eat the humble pie, apologise and praise them.”

“Praise them?” “Oh yes, that is what politicians want.” “But I thought one Governor has said publicly that he does not like people praising him, because it injures his spirit.” “Who is that?” “Peter Obi, Anambra Governor.” “Okwute Ndigbo” “The man has rejected that kind of praise singing, and he did so at a church assembly, before God and man.” “Peter the Rock” “No, candidly, I think we should seek an end to this culture of praise singing in politics. You know in some of these state-owned broadcast stations, when the station signs on in the morning, some minutes are devoted specially to the Governor and his wife: waking them up, praising them and so on. In one state in those days, even the Governor’s mother was addressed as “Mother Excellency.”

“Until we start having credible elections, that’s what will always happen.” “By the way one of your brothers says he is ready to die for Nigeria if only to ensure that Nigeria organizes credible elections in 2011.” “Who is that?” “Pastor Tunde Bakare” “I am sure the media quoted him out of context, that was how they quoted him out of context on the matter of the alleged $50, 000 that the Federal Government offered the Save Nigeria Group. The Pastor has since said that it is not true that the group was offered a bribe, the $50,000 was meant to be transport fare but it was rejected.” “What is the difference between a bribe and transport fare?” “The headline in the newspapers” “So, he won’t die for Nigeria in order to save Nigeria?” “What kind of nonsense talk is that? How can anyone die for Nigeria because of elections that some people are determined to rig so they too can go to the National Assembly to grab their own share of Federal Government overheads including service-wide votes!” “I am just quoting the man”

“Tony Momoh vs Senate of the Federal Republic of Nigeria.” “Well, just don’t go and repeat that headline about Tunde Bakare planning to die to save Nigeria from bad elections anywhere near his wife or children. You journalists must know when a man is speaking metaphorically. You think anybody would want to die for this country, so that other people can continue to enjoy? Even policemen no longer wait to confront armed robbers, they take to their heels.” “Well, people should not joke with death. Me, I can’t die for anything oh Why? I shall not die. I reject it in Jesus name.” “So, now, what do you think will happen to Lamido Sanusi?” “Nothing.” “I understand some bank chiefs are likely to leave town by weekend. You better keep an eye on your accounts in case you have money in the banks.” “I don’t have money in any bank. But why?” “Sanusi was reported as having disclosed in a live TV show in London (Ben TV actually) that another set of bank chiefs will be charged to court in a matter of days.” “Do you know any bank chief who is planning to bolt?” “What kind of stupid question is that?” “What kind of nonsense answer is that?” “You see, that is how you people always cast difficult headlines that distinguished Senators cannot understand.” “How time flies. The year is ending.” “So what are your plans for next year?” “I am thinking for going into the importation for toothpicks, furniture, textile materials and Tokunbo cars, now that the Jonathan administration has lifted the ban on the importation of those materials.” “Nigeria’s import prohibition list has never been effective anyway. So, not much has changed. This has always been an import-dependent economy, a dumping ground for foreign goods, until our economy becomes productive, we cannot raise the country’s competitiveness.”

“You can talk about all that after I have made my fortune from the importation of toothpicks. You are sermonizing, I see opportunities. Thank you, GEJ. I will send you a note on Facebook!” “Such a pity.”