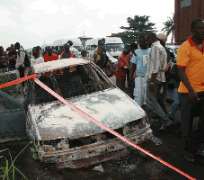 Vehicle involved in the petrol tanker fire in Lagos yesterday

No fewer than five persons, including a pregnant woman, her child and husband died, while several others have been declared missing in a petrol tanker fire in Lagos yesterday. Lagos Police Command Spokesman, Mr. Frank Mba, a Superintendent of Police, confirmed five persons dead and eight persons injured.

Daily Sun learnt the injured were rushed to nearby hospitals.

Mba's statement reads: 'Today at about 5.45a.m. a tanker with a registration number XZ 777 JJJ loaded with petroleum product suspected to be premium motor spirit was involved in a fatal accident near Fin-Niger Bus-Stop. The driver reportedly ran into a ditch under circumstances yet to be ascertained. The contents spilled on the road and it eventually went up in flames.'

He said the tanker and seven other vehicles were burnt, while five person were burnt beyond recognition and eight others sustained various degrees of burns.' Although the police put the casualty figure at five, Daily Sun learnt that more than 10 persons were consumed by the tanker fire.

Witnesses told Daily Sun that the cause of the tragedy should be traced to the tanker and another car on top speed which overtook the tanker earlier.

It was gathered that as the car suddenly moved in front of the long vehicle, the tanker driver attempted to maneuver to avoid ramming into it. In the process the tanker lost control, fell on its side, and spilled its cargo on the road.

The witnesses said the driver and conductor of the tanker tried to alert oncoming vehicles but the motorists failed to heed the warning and kept driving past.

It was gathered that the movement of the cars and mini-buses ignited the fire, leading to an explosion from the tanker.

Daily Sun gathered that the Deputy Commissioner of Police in charge of Operations in the Lagos State Police Command, Mr. Abdullateef Junaid immediately proceeded to the scene to assist in the evacuation of the victims of the fire.

A witness who was identified as John Dickson said shortly after, the men of the Nigeria Police, Nigeria Civil Defence Service Corps, Lagos State Transport Management Authority (LASTMA) and sympathizers arrived they were able to rescue eight people who suffered severe burns.

As at press time, nothing was heard about those who reportedly ran towards the swamp for safey. Efforts by the police only yielded scanty results as only two persons were rescued.

Some residents and sympathizers lamented that more people went towards the swamp, but only two were rescued.

They pointed to items such as shoes, groundnuts and baked cow pea which littered the vicinity of the swamp as evidence that there were still more people in the area. Dickson told Daily Sun that, 'a man and his pregnant wife and their little baby were burnt to death in the fire. Some people died inside the swamp. Some are still missing. I believe more than 10 persons were killed in the fire.'

Some of the victims were reportedly rushed to Holy Family Hospital, Satellite Town, while others were moved to the General Hospital.

In tears and anguish relatives of the deceased thronged the scene of the incident to search for their loved ones.

Achike said: 'We ran for our lives, you know the farmland is swampy. As we were running for safety, some of us fell into the swamp and we believe they are still there.'

He noted that he was able to see some of his colleagues who ran for dear life, ' but as I am talking to you, my best friend Okon is nowhere to be found. I am sure he drowned in the swamp.

Maduabuchi Okone who took an early bus from Mile-2 on his way to Republic of Benin said he managed to escape from the fire. 'Our bus ran into the fire. We have to rush out from the bus. I broke my leg. So, I could not run far but other occupants of the bus ran towards the farmland. I am still surprised that when we converged to continue the journey, some of the passengers were nowhere to be found.'

Continuing, he said, the fire fighters should, as a matter of urgency assist in combing the swampy area to fish out those that were missing.

Another person who could not control his anger, Martins Okoye said he was suspecting that his wife Rose might be among the dead. 'I have searched through all the hospitals the police directed me to visit but I can't find her. I believe my wife may have been burnt beyond recognition.'

He said his wife was travelling to Badagry in an unknown vehicle but that since the incident, her phone had been switched off. 'The time the incident happened coincided with the time my wife called me that she was on her way to Cotonou and that she was around Fin-Niger.

He said the government should take the issue of citizens seriously by making sure that those who were trapped in the swamp were rescued and that the identities of those who lost their lives in the fire tragedy were ascertained.

An artisan at the Dantata Bus Stop area of the Badagry-Mile 2 who was identified as Adeosun Yusuf, who was on his way to work when the incident occurred described what he saw as a waste of human lives.

Adeosun, a vulcaniser told Daily Sun that he was shocked at the spread of the fire and the way it consumed everything in its path.

'This is a bad way to start preparations for Christmas this December. I was on my way to work. I usually come out early because of people who go to work early and may have flat tyres. It was while I was just trying to set my tools of work that I heard a loud sound and when I looked up, I saw that it was a tanker carrying fuel that fell. Then, the driver and conductor got out and started making calls as I walked closer to see for myself the extent of damage.

'Within a few minutes, the tanker exploded and those of us trying to get to the scene of the accident had to run back for safety. I saw cars, buses and small trucks trying to escape the fire. The fire was so much that we were just unable to do anything to save those who were trapped. In fact, many people inside commuter buses and cars were burnt. I counted about 15 with several other people who ran into the swamp still missing.

'Those who tried to escape through the swamp were also caught by the fire as some of the fuel had spilled into the place and it was also on fire. The most painful was that which involved a pregnant woman, a child and a couple in a Honda car. There was nothing that could be done to save them until the fire service and the police got here. Even vehicles that were on the opposite side of the road did not escape. It's unfortunate that the bad state of our roads is contributing to deaths on our roads.'

A lady sympathiser who would not want her name in print said the incessant deaths caused by trailers and tankers in Lagos were alarming and wondered why a time frame was not created to regulate their movement.

'Government should help us with roads, had the ditch on the road been repaired before it got too wide, this accident would have been averted. I don't know why we have to wait until people die like chickens before action is taken. I have walked all the way from Barracks Bus Stop because the number of buses on the road were few to take most people.

'It was when I got here that I saw the reason for the scarcity of buses on the road. The ones that would have come our way were trapped in the traffic as a result of the accident. To imagine that these people left their homes this morning to go to their different places of work only to end up like this is very painful. Some of them had made several promises to their families for this Christmas and will no longer fulfil it,' she wailed.

Chima Okoli, a young trader on his way to the ASPAMDA market just before the trade fair complex who volunteered to join in the search party to rescue some of the victims said to have run into the swamp for safety came back disappointed saying the terrain was not friendly. 'I could not help the situation and decided to join others going into the swamp to help people who ran in there. Unfortunately, we came out not finding anyone but a pair of shoes and a kaftan. We need a proper rescue party to go back and search for people before dangerous reptiles devour them. We don't have rain boots and any instrument to conduct a proper search.'

The Lagos State Fire and Safety Services arrived late to the scene. But they firemen were able to put out the raging inferno.

The accident caused traffic gridlock which made commuters to trek to there various destinations. The police officers at the scene discovered that the tanker (Mack) had two registration numbers. It was suspected that the vehicle could have been used for illegal business. Among the vehicles that were burnt beyond recognition include a Toyota Hiace with Lagos registration number DH 952 APP, two Volkswagen buses - one with registration number XR 56 EKY, one 505 Peugeot car and four other cars.