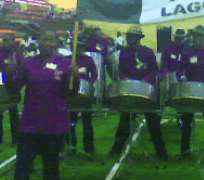 It was a moment of victory for pupils of the Federal Government College, Ijanikin, Lagos (FGCL) recently as they won the second Junior National Steelband competition which held at the Gymnasium Hall, National Stadium, Surulere, Lagos. The second position went to Air Force Secondary School, Ikeja, Lagos, while the Nigerian Navy Secondary School, Borokiri, Port Harcourt, which had earlier won the the first edition of the competition, came third.

However, FGCL's victory was attributed to the scintillating performance of the students which earned them other prizes such as Best Pan Soloist, Best Pan Rhythmist, Best Drummer, Best Stage Performance and Best Costumed Band.

The competition saw various schools playing different genres of music to the delight and admiration of the audience. During the performance, some of the pupils wore their school uniforms as costumes while FGCL's pupils appeared in diverse costumes to depict the various genres of music. For example, during Nigerian native song, (Eji-Owuro), FGCL dancers were seen in traditional Yoruba attires. Also during the Lambada song, the dancers in their white and black costumes danced to the delight of the audience.

In his welcome address, former President Olusegun Obasanjo urged Nigerians to continue to support Steel band music in the country in order to sustain the genre. According to him, Steelband music came into Nigeria during the Festival of Arts and Culture (FESTAC) through Trinidad and Tobago. After the festival, Nigeria went into collaboration with Trinidad and Tobago and many Nigerians traveled to the country to learn how to play the instrument.

Obasanjo who was impressed by the performance requested that they leave their instruments behind for Nigerians to learn how to play the instruments. His words 'I am surprised that there is still a Steelband competition making waves in the country. I urge schools to teach their students how to play Steelband music so that they can keep the standard high''.

Mr Collin Conelly, who represented the High Commissioner of Trinidad and Tobago, also said ' We owe a significant debt to Obasanjo for giving Nigeria the opportunity to be exposed to Steelband music. There has been significant development in the culture between both countries because it was a singular decision which had life changing consequences. Nigerian youths should be exposed to Steelband music and their experience shows that they are learning a lot.'

He further disclosed that every year, in Trinidad and Tobago, there is a Steelband carnival featuring different countries. A member of the music committee for FESTAC 77 and chief judge of the competition, Prof. Mosunmola Omobiyi-Obidike equally commended Obasanjo for convincing Trinidad and Tobago to leave their instruments in Nigeria. ''The seed that was sown 33 years ago has germinated before our very eyes and this is one of the fruits of the labour.''explained Omibiyi-Obidike who praised the Steelband Panorama for nurturing what they have learnt through Steelband music and transforming it into a competition.

During the competition, the judges focused on such areas as costumes, quality of stage performance, team spirit, conduct on stage, musical expertise, expressions (facial and body), as well as ability to thrill the audience through arrangement and presentation. Other Nigerian native songs performed includ Eji-Ewuro, The lion sleeps tonight, Under the sea, Soca tune, Nwan Okrika, Lambada and Never on a Sunday.

President of Steel Band Association of National organizing committe, Chief Bowei S. Bowei told Daily Sun that the competition was designed the students' knowledge of unconventional musical instruments and to widen the scope of those who intend to make music a career. Also one of the objectives is to promote the instrument as a style of music and tt raise a family of steel band players.