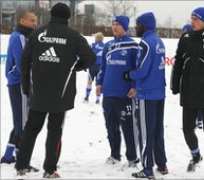 Ghana defender Hans Sarpei has been banished to the reserves by the coach of his German club Schalke.

Sarpei's colleagues Jermaine Jones and Alexander Baumjohann have also been sanctioned; Jones because of poor performance in a match.

The three will be confined to the reserves until the German winter break, which starts on 20 December.

Schalke were thumped 5-0 by Kaiserslautern last weekend, which was the trigger for Magath's wrath.

He has also shortened the Christmas break for the entire squad and decided that training will start earlier each day.

Schalke are 15th in the Bundesliga table, just two points above the relegation zone.