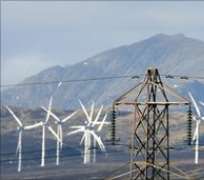 The government is counting on a massive growth in wind power to meet its 2020 renewable target.

The UK is making “unacceptably slow” progress towards its renewable energy targets, a committee of MPs says.

The Committee of Public Accounts also said that there was no clear understanding of the cost and success of some alternative technologies.

It said the Department of Energy and Climate Change needed “a greater sense of urgency and purpose”.

Energy Secretary Chris Huhne said the coalition government was determined to “deliver on the low-carbon economy”.

During its hearings, the committee was told that the UK would miss its target to supply 10% of electricity from renewable sources by the end of 2010.

The report, Funding the Development of Renewable Energy Technologies, said the Energy Department and its predecessors had not done enough to address the slow progress.

The chair of the committee, Margaret Hodge, said: “Given the urgency and importance of the issue, progress in meeting renewable energy targets has been unacceptably slow over the last decade.”

The current Energy Secretary, Chris Huhne, said his department was determined to put it right. “It will be a huge challenge but the coalition is determined to move beyond promises and actually deliver on the low-carbon economy,” he said.

Unprepared
Ms Hodge said that some £180m of the funds allocated to support renewable energy technologies had gone unspent.

The Energy Department seemed unprepared for the future despite signing up to the legally binding EU-target to supply 15% of the UK's energy from renewable sources by 2020.

The UK agreed to the EU target, the report concludes, despite having no “clear plans, targets for each renewable energy technology, estimates of funding required or understanding how the rate at which planning applications for onshore wind turbines were being rejected might affect progress”.

The report criticised the complex web of organisations that deliver government funding for renewable energy technologies.

The Energy Department does not have direct control over these organisations, and consequently “does not have a clear understanding of how much has been spent or what has been achieved”, the report said.

Mr Huhne said there was plenty of catching up to do.

“The last 10 years have been a lost decade for renewables. Labour's tragic legacy is that we are 25th out of 27 EU member states on renewables. We have been playing as amateurs when we should have been in the Premiership.”