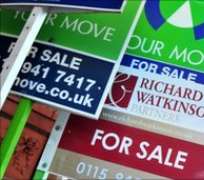 Some weakness in property prices is being driven by a return of sellers to the market, analysts say

Meanwhile, rents are continuing to be pushed up as more people turn to renting a home instead of trying to buy one.

The Royal Institution of Chartered Surveyors (Rics) said demand from would-be renters was rising while the supply of new homes to let was falling.

Still declining
The continued fall in house prices as measured by the Nationwide was the fourth drop in the past five months.

Prices in the past three months were also 1.3% lower than they were in the previous three months, a good indication of the recent trend.

The Nationwide's economist Martin Gahbauer said he expected more of the same in the coming months.

“There is little evidence to suggest that house price declines are likely to accelerate in the months ahead,” he said.

“Much of the weakness in property values since the spring has been driven by a return of sellers to the market.

“However, there is little to indicate that these sellers need to achieve a sale urgently for financial or economic reasons, which means that the downward pressure on house prices is only modest,” he added.

'Strong lettings'
Rics said more people were being forced to rent because they could not obtain a mortgage to buy a home.

CML
It said the upward pressure on rents was now at its highest since the spring of 2007.

“The lettings sector has become increasingly strong over the past nine months, in contrast to the housing market which continues to slow,” said Jeremy Leaf of Rics.

“Many have turned to the rental market because they fear further price reductions in the housing market, or because they cannot obtain the necessary finance to buy,” he added.

Demand for rented homes was reported to be at its strongest since the end of 2008 and the supply of new homes to let had fallen for the fifth month in a row.

'Even more difficult'
The mortgage rationing that lies at the heart of current property market trends seems certain to continue, according to the Council of Mortgage Lenders (CML).

In its regular market commentary, it said that the contraction in lending since the onset of the credit crunch in 2007 had “been the most severe on record”, with sales at their lowest level since records began in 1978.

It said that mortgage rationing had been particularly severe for first time buyers and estimated that 800,000 of them had been frozen out of the housing market in the past three years.

“There is no sign of a return to more 'normal' mortgage funding availability in the foreseeable future,” the CML warned.

That was underlined by a decision of the RBS and NatWest banks to stop offering interest-only mortgages to first-time buyers, forcing them to take out home loans on a full capital-and-interest basis instead.

“This sort of policy change makes getting a mortgage even more difficult,” said Aaron Strutt of brokers Trinity Financial.