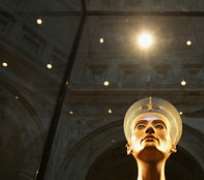 CAIRO—Zahi Hawass, Egypt's larger-than-life antiquities chief, is hunting for treasures from some of the richest known troves—the world's prominent museums.

In an increasingly public campaign, Dr. Hawass is lobbying international museums to return some of Egypt's most important archaeological artifacts. These include the Rosetta Stone, displayed for more than 200 years in the British Museum, and the Zodiac of Dendera, housed in the Louvre in Paris.

"I'm going to fight. I'm going to go and tell the world that these countries have no right to these antiquities," Dr. Hawass said in an interview.

A Bid to Reclaim Egyptian Antiquities
View Slideshow
Andreas Rentz/Getty Images
The bust of Queen Nefertiti on display at the Neues Museum in Berlin in 2009.

More photos and interactive graphics
His most recent victory was the announcement Wednesday that the Metropolitan Museum of Art in New York would return 19 items, including a bracelet and a small bronze statue of a dog, that were excavated from the tomb of King Tutankhamun and held by the museum for decades.

"These objects were never meant to have left Egypt, and therefore should rightfully belong to the Government of Egypt," said Met Director Thomas Campbell. The items will remain on display in New York City for several months before being returned to Egypt in June 2011.

Dr. Hawass called the return "a wonderful gesture" and praised the Met for its "ethical behavior."

His repatriation campaign has resulted over the years in the return of more than 5,000 antiquities to Egypt, Dr. Hawass claims. The items he is seeking are intended to fill a new national museum in Cairo set for completion in 2013. The 935,000-square-foot Grand Egyptian Museum will cost an estimated $550 million, house more than 100,000 artifacts and will be "one of the flagship institutions in the world," the archaeologist said.

Dr. Hawass, the head of Egypt's Supreme Council for Antiquities, said he envisions the Rosetta Stone, a 196 B.C. text used to first decipher hieroglyphs, as the "natural centerpiece" for the new museum. He also seeks return of a Ramses II statue on display in Turin, Italy, and a statue depicting the architect of the Great Pyramid in the Museum of Fine Arts, Boston.

Dr. Hawass is something of a global media icon, following a series of heavily hyped TV specials and a carefully cultivated public persona. His recent History Channel series, "Chasing Mummies," depicted him as a sort of burly denim-clad Indiana Jones in a trademark leather Stetson hat. The archaeologist earned his Ph.D. in Egyptology in 1987 from the University of Pennsylvania and returned to Egypt the same year. He was appointed director of the Giza Plateau, which includes overseeing the Pyramids and the Sphinx. He was named head of the Supreme Council of Antiquities in 2002.

Imperious and relentlessly self-promoting, Dr. Hawass also has become a polarizing figure in the insular ranks of international archaeology, and may soon become more so. Some critics accuse him of hogging credit for other people's work and placing good television over sound science.

"I think Egyptologists kind of laugh and shrug their shoulders at Zahi," said one British archaeologist, who has worked with Dr. Hawass.

But few seem to doubt the sincerity of his antiquity-repatriation effort, which has become a personal mission for the 63-year-old. Now, he is expanding his campaign. In April, he hosted a conference bringing together more than a dozen countries around the cause of repatriation of national treasures. Several participants, including Libya, Greece and Nigeria, submitted wish lists of items they want returned.

View Full Image
zuma, Reuters
Even colleagues sympathetic to Dr. Hawass question whether such institutions will ever set the dangerous precedent of giving in to his demands. "If one object is given back to Egypt, then maybe Benin will want something and all the museums of the world will empty out," said Salima Ikram, an Egyptology professor at the American University in Cairo.

The Rosetta Stone, for example, passed into British hands in 1801 when the British defeated Egypt's French occupiers. There is no legal precedent for forcing the British Museum to give it up now.

Emily Teeter, an Egyptologist at the University of Chicago's Oriental Institute, said the international legal framework regarding antiquities repatriation is murky.

A 1970 Unesco accord commits signatory countries to ban traffic in stolen antiquities, and sets standards for provenance. But many items on the Hawass wish list fall outside the purview of that accord.

Dr. Hawass's toughest legal battle may be over the Rosetta Stone, because it was a spoil of war. The main modern example of legal proceedings to return spoils of war relate to World War II. Tribunals at the Hague have forced Germany and Russia to return items looted from private art collections. But that example isn't relevant to Dr. Hawass's campaign, Dr. Teeter said, because the 1954 Hague Convention regarding looted cultural property doesn't cover actions before World War II. She declined to comment on Dr. Hawass's chances of getting the Rosetta Stone.

Esme Wilson, a spokeswoman for the British Museum, said the institution has never received an official demand for the permanent return of the Rosetta Stone—merely requests for short-term loans that she says are under consideration.

In the absence of legal legitimacy, Dr. Hawass has two primary weapons at his disposal: rallying public opinion and denying institutions the right to conduct digs or research in Egypt.

Dr. Teeter credits Dr. Hawass and his counterpart in Italy, Maurizio Fiorilli, with instilling a new sense of caution and attention to detail in the international antiquities world.

The second tactic has been used by Dr. Hawass to more effect. In 2009, the Louvre agreed to return several ancient wall frescoes he demanded, but only after he blackballed Louvre-associated archaeologists from working in Egypt.

In the past, European institutions holding Egyptian antiquities have expressed concern that the Egyptian government wouldn't be able to preserve and protect these historic treasures. The argument gained some credence in late August when a Van Gogh painting valued at $50 million was stolen in broad daylight from a museum run by the Ministry of Culture.