THIS UI STUDENT QUALIFIED AS CHARTERED ACCOUNTANT AT 21 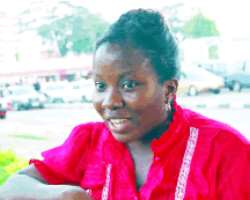 Petite, timid and shy, Adedayo Adegbite looks more a Senior Secondary School II teenage pupil. But she is not. The 23-year-old has just finished writing the finals of her Bachelor of Education (B.Ed) degree in Economics at the University of Ibadan (UI). And wait for it; she is tipped to graduate with First Class honours!

But, that is not the only amazing thing about this girl. By her second year in the university and at just 21 years old, she had already qualified as a Chartered Accountant with the Institute of Chartered Accountants of Nigeria (ICAN), a feat many 'grandpas' and 'grandma' are still struggling to achieve.

Yet, the self-effacing and humble Educational Management student does not believe there is anything extra-ordinary about her. In fact, she tells you she was just an average student while in high school, that she dates a boyfriend as any of her peers, only reads at her convenience and likes to 'gist', with her friends and mates.

What makes all the difference, she says, is God's grace and a positive attitude of being focused.

This reporter had heard about the brilliant young lady, obtained her phone number and booked an interview appointment with her.

We had agreed to meet at the university campus entrance, owing to an on-going strike by the Non-Academic Staff Union (NASU) of the institution, which saw the school shut.

I had advised her to look out for a black Honda City car branded with The Sun logo in which I would be waiting. Although I was not particularly expecting to see an oldie, I had not imagined the very pretty young 'thing' that tapped on the window of the car was my interview subject.

She brought along a bodyguard though, a lanky young man with a bag slouched across his shoulders.

'Are you afraid I could be a kidnapper?' I joked as we confirmed identities. She laughed shyly as her chaperon, smiling, walked some metres ahead.

Born in Ibadan on April 15, 1987 'Dayo is the first born of three children of Michael Olusegun Adegbite, a retired banker and, Grace, a civil servant with the Oyo State Government. Her other siblings are Ademola (brother) 20, and Bola, (sister) 18.

She had her nursery and primary school at Subuola Memorial Nursery and Primary School, Ibadan and left in Primary four for Ikolaba High School in the same city.

But, dissatisfied with the standard of tuition in the public school, she was made by her parent to take the Common Entrance Examination and gained admission into the Federal Government Girls College, Oyo in 1996/1997 session.

Dayo's dream is to work in an Accounting /Audit firm as a Chartered Accountant and this guided  her choice of subjects. She was a commercial student.

But, her ambition to study Accounting in the university suffered a setback as she could not secure admission for her preferred course after the three attempts she wrote the Universities Matriculation Examinations (UME).

'I applied to the Obafemi Awolowo University (OAU), Ife for Accounting, but my JAMB score was poor. I had 199. So, I lost admission that year. The following year, I decided to change by filling in Economics. This time I had 256, but I was not taken for the course. In the process of changing courses, I was advised to choose Educational Management, with Economics as my teaching subject. I felt that was a good idea, but I lost the chance that year also.

'The following year, I wrote the exam, making Educational Management my first choice with Economics as teaching subject. This time I scored 230 and was admitted into the Department, at the University of Ibadan.

Dayo says she was persuaded to go for the course because as a management course, it is related to Economics and Accounting. 'We take some accounting and management courses in the universality which can be applied to all situations. Besides, with Economics as my teaching subject, I felt I've not deviated much, but has diversified for greater marketability,' she explains.

All this while, Dayo had commenced training as an Accountant under ICAN's Accounting Technician Scheme (ATS) on the advice of her father, who felt she should not waste the years she spent at home waiting for admission. She successfully completed the scheme and went on to enroll for the foundation level of ICAN examinations, made her papers such that by her 200 level in the university, she had passed the final examinations and qualified as an Associate Member of the institute. That was in 2008.

Dayo says combining her ICAN studies with campus work was most strenuous, but says she found it exciting 'I enjoyed it, because in the university, I was learning new things like Sociology, Philosophy, History, teaching methods and the rest and these were novel to me. I was reading for both programmes at the same time. I must say though that it was challenging. There was a particular time I had school exams and an ICAN paper same week, so I had to read hard, she tells Education Review.

Having attained her career goal so early, why continue with the drudgery of university work? You ask her.

She explains: 'My father always encouraged us, his children, on the need to become graduates. He likes to stress that this is important so that we're not limited in career opportunities on account of not having at least a first degree'.

Dayo may not be regreting her heeding her father's counsel. Since her entry into the department she has consistently topped her class. She ended her first year in the university with a Cummulative Grade Point Average (CGPA) of 4.9, barely missing the first class margin by a point, but crossing the borderline at 300 level with a CGPA of 5.0

(First Class), a position, it is believed she will consolidate on in her final examination result due to be released soon by the university Senate.

She explains her streak of academic success thus: 'When at 100, I had 4.9 (CGPA); I told myself I had to work hard because I was close to making a First Class. I mean, what is the point of scoring 4.9 and being in the same class (2nd class upper division)  as  someone who had 4.6? So, I was determined there and then to work harder and I believe I'm going to make it'.

That must have involved a lot of 'swotting' and TDB (Till Day Break reading), you suggest.

'Not necessarily, 'Dayo corrects, 'I actually don't like overnight reading. I don't read when I'm tired and that would be when I've walked round the school or having had lectures and so on. I don't go to the Kenneth Dike (central) library.

I prefer to read in my hall, either the hall's reading rooms or my room, when I feel like. But, once I settle down to read, I spend quality time doing it'.

Dayo would not describe herself as an exceptionally bright student. As she she puts it: 'I actually don't like to describe myself as that, because everything that has happened to me has a divine intervention. There is God's hand in it, because where I am today, I never saw myself there. In my secondary school, I was just an average student, not the kind that leads my class. I think I started catching up as from SSS.II. Everything changed from then on'.

The question has deliberately been reserved for this strategic last moment. But, when it landed, the bomb did not exactly fluster the young lady. But, the reply came as a surprise, as one would have loved to explain her streak of success to lack of such mundane distractions as dating and partying: 'Do you have a boyfriend?,' I ask her.

'Yes,' came the reply.
How long have you both been dating?'
'Since 2008, shortly after I qualified'.
Is he your first boyfriend?' I persist, looking intently into her eyes.

'No', she quips.
''If he is not your first boyfriend, how many have you dated before meeting him?'

To the last question, Dayo paused, gave the reporter a rebuking wink and smiling, wagged her index finger, protesting the intrusive probing into her personal secrets.

You give up, but asks if her love affair does not affect her studies? She says no, explaining: 'It depends on the person you are going out with. If he is a serious person, it'll rub off well on you, but if he is not, definitely, the reverse will be the case.

In this instance, he happens to be a serious student himself'.

Dayo, however, is not a party freak, although she enjoys 'gisting' with her mates a lot and likes to relax watching Nigerian and foreign movies, as well as reading novels.

Her plan remains to work in one of the big accounting/auditing firms in the country, although she says she may consider encouragement and pressures on her by her professors to join the faculty as a lecturer, 'with the right incentives', she stresses.