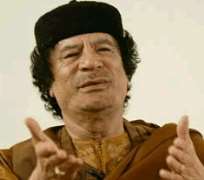 Gaddafi
Libyan President Muammar Gaddafi yesterday demanded five billion Euros from the European Union to control illegal migration into Europe even as he warned Europe that Africa was capable of standing on its own.

The Libyan leader, expressed regret that the World Trade Organisation (WTO) policy was unable to give Africa the opportunity to build a single industry and manage effect of brain drain on Africa, saying Africa should be allowed to make brain-gain for the heavy investment in education by their nations.

While stressing the need to stop illegal immigrants' influx into Europe from Africa, he called on Europe to reconsider giving asylum to political seekers, stressing that it was the rich that were benefiting.

He said this at the opening of the third AU-EU Summit under the theme: 'Investment, Economic Growth and Job Creation,' going on in Tripoli, capital city of the Great Socialist People's Libyan Arab Jamahiriya, where Vice President Namadi Sambo, is representing President Good-Luck Jonathan.

Sambo, who is among 80 Heads of State and Government from Africa and Europe, arrived Tripoli International Airport at  about 9. 45 pm  on Sunday and was received by Libyan government officials led by the Foreign Minister, Mr. Mousa Kusa and Nigerian Embassy officials led by Charge de Affairs, Mr. Haroon Umar.

The Africa-EU Summit is a concretiSation of the Joint Africa-EU strategic partnership adopted in December 2007 in Lisbon with the aim of enhancing the socio-economic and political development of both the European and the African continents for the interest of both populations.

In addition to the theme of the Summit, participants also brainstormed on issues relating to regional integration, infrastructure, ICT, science and private sector development. Views were also exchanged on energy, climate change, space, the Millenium Development Goals (MDGs), agriculture and food security, amongst others.

The Libyan President on the issue of Somalia pirates and the challenge to identify their sponsors, asked rhetorically if the United States or Somalia were the sponsors.

He expressed the need to separate cooperation with Africa from West Africa, South Africa, East Africa or central to more of unified Africa for meaningful bargain with Europe.

He also called for the reform of the United Nations that would centralise its operations to make countries equal rather than giving Security Council platform to few nations.

Gaddafi said he would like to see the benefits of the Mediterranean Sea impacting on the development of Africa as well as meeting the energy needs of Africa and Europe.  He made reference to Zimbabwe having the capacity to meet the energy need of Africa if fully utilised.

The Libyan leader further stated that Africa had advantage over other continents to utilise solar and renewable energy sources if properly harnessed.

He called for the shifting of the AU-EU Summit to four years instead of the existing arrangement of three years.

Meanwhile, the Secretary- General of the African, Caribbean and Pacific Group of States, Dr. Mohammed Ibn Chambas, has called on various African governments to strive to address the infrastructural deficits on the continent as a way of promoting growth .He argues that without a concerted effort aimed at improving such on the continent the import of business would never be realised.

In a chat with newsmen, Chambas indicated that the deliberations would be useful at this crucial time for the two bodies. According to him the theme which is centered on Job creation, investments amongst others is appropriate owing to the fact that such is the challenge to most African countries.

He however said that outcomes of such meetings should be documented and followed through so as to ensure maximum benefit. Over 80 European and African Heads of State and Government have convened in Tripoli under the overarching theme 'Investment, Economic Growth and Job Creation' to take cooperation between the two continents to a new, more ambitious level.

Chambas said the partnership will be beneficial if benchmarks are set.