SANUSI GOT IT WRONG, SAYS BANKOLE 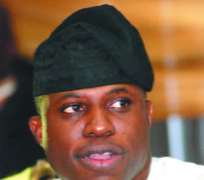 The Speaker of the House of Representatives, Rt. Hon, Dimeji Bankole has faulted the statement credited to the Governor of Central Bank, Mallam Sanusi Lamido Sanusi that the National Assembly spends 25 per cent of the nation's budget.

The Speaker said only 2.5 per cent, which amounts to N100billion out of the N4.6trillion budget is allocated to the federal lawmakers.

Bankole stated this yesterday while addressing the staff and students of the University of Lagos, Akoka at a programme tagged 'A day with an Icon.' While refuting the claims of Sanusi, the Speaker explained that the CBN, as at four years ago, received N200billion and wondered how the N100billion allotted to the National Assembly could translate to 25 per cent.

Bankole, a guest speaker at the occasion, also decried the rot in the country in his paper entitled, 'The Challenges and Prospects of Transforming the Nigerian Democratic Polity.'

While acknowledging the progressive strides in the financial industry, Bankole also questioned the selective prosecution of a bank chief, leaving out others accused of the same offence.

'Well, maybe a former banking MD is being prosecuted. What about the rest? Why is it that the woman is the one that you have to even do first? What about the regulators, those who were in charge of making sure that that mess does not happen. What have we done to those ones? Anyway, that is another subject for another day,' he said.

Bankole recounted the woes of the nation and accused old stock leadership for plunging the country into a ditch.

He charged the youths to wake up from slumber and take advantage of their strength to redeem the country from the grip of visionless leaders.

'We have quite a few in strategic places in governance in Nigeria who have no business running our affairs. Demographic studies confirm that young people constitute about 70 per cent of Nigerian population, 72 per cent of the population of Nigeria is under 30 years old. Where are we? How equipped are we?' Bankole queried.

He said a frightening high percentage of Nigerian youths are totally disconnected from the society, as they live in unquiet desperation.

'They are alienated, they are annoyed. They are looking for visa to places like the United States, Europe, Asia, Thailand, walking through the deserts of Africa and dying. Go to places like Libya. It is this sense of alienation that led to the growth of Niger-Delta militancy. It is this that has led to the new wave of armed robbery and kidnapping.…Nigeria needs young men and women who will be imbued with the zeal and passion for national greatness. We need the youths working hand in hand with only mature and responsible adults, adults with vision, sense of purpose, urgency and patriotism that can rescue our present and chart a better future for all of us and our children,' he advised.