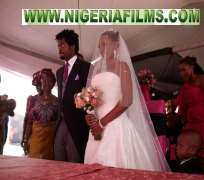 The wedding of ace comedian Bright Okpocha otherwise known as Basket mouth has come and gone, but controversy has since been trailing it. It was reported initially that the Glo ambassador locked out some of his colleagues and journalists, not allowing them into the wedding venue. Another information at NFC disposal revealed that most family members of the comedian who were without invitation cards were also deprived of entering. However, the blame has been shifted to overzealous security men who chased guests whose names were not in the register away from the event.