LAGOS DOCTORS STRIKE: THE POLITICS, CASUALTIES AND THE LESSONS 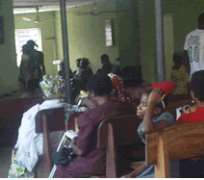 Stranded patients during the strike
Patients are always at the receiving end in government's doctors' face-off. For a mega city like Lagos, with a population of about 18 million, it is a near holocaust for doctors to suspend healthcare delivery even for an hour.

Our reporters have stumbled on emergency cases in public hospitals who have to spend hours in the ambulance that brought them before space is created for their admission. It is as bad as that.

At a public hospital in the city, Accident and Emergency (A&E) space was also a problem until last year when Skye Bank intervened by increasing A&E bed space from 36 to over 100. Yet, with increasing population of the city, there is still patients congestion in Lagos public hospitals.

With the above picture, it is obvious Lagos is the last place that doctors should contemplate a strike, but the men and women of the once noble profession claim they have been pushed to the brink.

When the national doctors' strike and agitations that led to the approval of the Consolidated Medical Salary Scale (CONMESS) under the tenure of Prof. Babatunde Osotimehin as Minister of Health, Lagos doctors played a significant role in the struggle. Lagos being central in the nation's economy, with its big population, joining any national doctors' by Lagos doctors give the action more teeth. Approval of the Consolidated Medical Salary Scale (CONMESS) by the Federal Government was binding on every government doctor, whether federal or state. So, it was like an open invitation for a showdown when the Lagos State government earlier tried the strategy that they were not consulted before CONMESS was approved. That strategy was counter-productive because the strike that broke Nigerian Medical Association (NMA) strike that broke Federal Government resistance and made her approve CONMESS also took place in Lagos and the state government what doctors demand.

The strategy of using the law to intimidate the doctors not to go on strike, through the National Industrial Court (NIC), Lagos, made doctors more adamant, if that action achieved anything, it propelled the doctors to be battle ready for any war and to devise measures to justify their strike. One of them was offering to treat patients free of charge outside government hospitals in designated centres like Ikeja Police College.

After the NIC ordered that government and doctors to resolve their differences and there was no resolution, the Chairman of the Medical Guild, the representative organ of all doctors in Lagos State, Dr Ayobode Williams, noted that the various affiliate bodies of the Association of Resident Doctors (ARD) LASUTH, the Medical and Dental Consultants Association of LASUTH and general hospitals in the state had actively engaged the state government in dialogue via letters and meetings, but which the latter allegedly ignored.

He noted that 'the response of the Lagos State Government was that it took the Medical Guild and ARD to court via separate summons. The agents of the government also dragged our past chairman to the Economic and Financial Crimes Commission (EFCC) on charges of mismanagement of our association's fund while it has also stopped the legitimate deductions of members' dues since January 2009.'

The doctors said that the response of the government has been 'unpleasant and lacking in goodwill and reciprocity,' saying 'government could avert an unnecessary industrial action if it had wanted.'

The feeling that Lagos state government can pay CONMESS and avert the strike was not peculiar to only Lagos employed doctors alone, federal doctors, residents of Lagos and observers had similar feelings. Not a few Lagosians expressed dissatisfaction with the way the state government allowed the strike to drag to 14 weeks.

Firstly, there is this feeling that Lagos controls the largest revenue and tax income among the 36 states going by the fact that it is the commercial nerve centre of the nation and mega city. It is also widely believed that Lagos is the richest state in the federation, in fact, about 10 times richer than some states. Development projects by the state government has also helped to buttress this point.

The argument is if less privileged states have started implementing CONMESS, others negotiating to as much as 70 per cent CONMESS, how come the giant of them all financially has refused even to call doctors to a round-table for negotiations on how to tackle the CONMESS? The present administration in Lagos state has earned the reputation of being the best government in the federation, but their relationship with doctors has always been a blemish on their garment.

National President, National Association of Resident Doctors (NARD), Dr Lanre Ekujimi had stated that rather than trying to force doctors to render their services in Lagos, the state government should call them to the round-table of negotiation. In fact, he maintained that Lagos cannot force doctors to work against their will, no matter what strategy they employ. He blamed the state government for how long the strike lingered.

Speaking on the sympathy strike by federal doctors in Lagos during the 11th week of the Lagos doctors strike that crippled the federal hospitals in the state: The Lagos University Teaching Hospital (LUTH), Idi-Araba, Lagos, National Orthopaedic Hospital, Igbobi (NOHI), Psychiatric Hospital, Yaba and Federal Medical Centre, Ebutte-Metta, Dr Ekijumi said, 'It is the appropriate step to take. The earlier the Lagos state CONMESS issue is resolved, the better for all. If you come to LUTH, there is over-flow of patients and people are dying.'

It was reported that the strike embarked by Lagos doctors and the crippling of the 26 Lagos State Owned hospitals and one maternity home caused over-flow of patients to the four federal hospitals in Lagos. That did not help the healthcare delivery in the state, it bastardized it. Patients died for lack of access to healthcare. Private hospitals helped out, but most patients with chronic illnesses can only find succour in tertiary health institutions like LASUTH and LUTH while majority healthcare seekers in the state prefer public hospitals, because they can't afford the huge bills of private hospitals.

Federal doctors embarking on sympathy strike was the last straw that broke the camel's back. Though the sympathy strike was a three day warning strike, the impact on patients was beyond description. Patients died in thousands, mortuaries over-flowed. Lagos with about 18 mission dwellers was more or less like a state without healthcare delivery system except private hospitals.

On the sympathy strike by federal doctors, Chairman Nigerian Medical Association, Lagos state chapter, Dr Olusoji Temiye said, 'The reason for the sympathy strike is because Lagos state employed doctors, the Medical Guild, has been on strike for 11 weeks and the state government feel unconcerned. They have gone ahead to punish the doctors by seizing salaries. Because of the strike by the Medical Guild, Federal Government owned medical facilities in the state are badly put under pressure. Four federal government hospitals cannot take the number of patients 26 Lagos state hospitals and one maternity home in the state were catering for.'

Dr Ekijumi faulted government's reluctance to pump money into healthcare delivery system, but is ready to spend any amount of money to fund politics and the political class. 'How much does an average law-maker earn per month?' he queried.

'If you want to offer free healthcare to the people, then fund it. If you cannot fund it, increase hospital bills. Don't do free healthcare system at the expense of doctors. It has come to the point that may be doctors should forget about healthcare and find something else to do.'

In CONMESS, the salary of a resident doctor is about N187,000, a full time consultant takes over N400,000 but if they are teaching and are also consultants, they take less than that.

'In the United States, healthcare providers are the best paid in the labour market. Nigeria doctors go abroad to do menial jobs, make some money and come back to Nigeria. Is that life?

When the doctors eventually spoke, they turned down the 75 percent CONMESS implementation proposal by Lagos state government and insisted on 100 percent CONMESS. With that stand, they continued the strike. The three day warning strike by federal doctors that was to end on a Friday over-flowed to the next week, partly because the next Tuesday and Wednesday were Sallah holidays and workers stayed away from work. When the holidays were over, the federal doctors continued strike obviously because the face-off between the government and their colleagues in Lagos state employed doctors was not resolved.

In a statement announcing the suspension of the strike, Dr Ayabode Williams, Chairman, Medical Guild noted that doctors in the state have reached a mutual agreement with state government. 'The decision to suspend the strike is informed by the conviction of the doctors that the state government equally needs time to show its sincerity on the agreement reached.

The agreement reached with the doctors that propelled the suspension of the protracted strike reads in part: 'That with effect from January 2011, government would implement the mutual, agreeable wage review which will not put doctors in Lagos state hospitals at a comparison disadvantage with other health institutions.

However, Vice-chairman, Medical Guild, Dr Majolagbe Taofeel said, 'we would give the government till the end of January to fulfill its promises, if they fail by the first week of February, the strike would resume again,' he said.

When two elephants fight, the grass suffers. In all these, patients in Lagos were the casualties. They died in their numbers while the strike lasted.

The lesson of the last Lagos doctors strike is simply that a stitch in time as far as healthcare delivery is concerned saves lives. The stance that Lagos state government took now which has led to the suspension of the strike, if they had taken it in September, maybe there would not have been any strike and no life would have been lost as a result of strike.