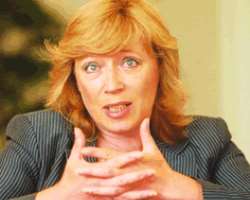 Some readers responded to the first part of this column last week with a holy umbrage. How come a pastor noticed a woman with a pair of beautiful legs? Pastors are not supposed to see such things -presumably, pastors should see only 'holy' things, even if they are reporting carnal things! Someone says reporting such things was 'unpastoral', but, however, declared that he is looking forward to the second part!

That's my people for you -often dancing around moral ambiguities. A case of conflict between religious hang-ups and carnal curiosity. Even the Jews were like that. One day, they saw Jesus eating at a party and accused him of gluttony and being a wine bibber. What is wrong with these people?, Jesus wondered. John the Baptist refused food and drink and you complained and now I came eating and drinking and you accuse me of gluttony! If you want the reference, find it in the gospels as a homework! What some of the readers seem to forget is that the first duty of a reporter is to tell readers the truth as it is, not to gloss over it. That is the reportorial model in the world's greatest and perfect manual on reportage -the Bible.

I've always suspected that if the Bible were the work of today's religious people, some portions like the Songs of Solomon, Proverb 6, Ezekiel 23, Genesis 9: 20-23, 19: 30-30, etc would simply have been chopped off as too embarrassing and therefore, not politically correct! Not the Bible writers. They report the good, the bad, the ugly and move on. Is everything reported inspired by God? Yes. Does God endorse all the actions? No. But, everything is faithfully reported simply because they happened. Period.

Back to our lady, the Slovakian Prime Minister, Iveta Radicova's cerebral discourse on media freedom, objectivity and the imperatives of the conflict between ideals and realism in different societies. Reminder: She was one of the many speakers at the 60th anniversary of the International Press Institute jointly hosted by the twin city of Vienna, Austria and Bratislava, Slovakia. Theme: Thinking the Unthinkable: Are We Losing the News? This with a sub-theme, Media Freedom in the New Media Landscape.

Media freedom and openness as practised in the West, Prime Minister Radicova espoused, may not necessarily be suitable for some societies where basic survival is the critical human need. She wants dialogue on some critical posers. For instance, when the Western media harp on openness and freedom, is it really about public interest or about vested commercial interest driven by inter-media competition? Is it issue of content or media platform that is at stake?

'At times,' she argues, flashing her audience with her flirty smiles ostensibly designed to conceal her jibes at the media lords listening raptly to her exhortation, 'to be open, the forum is more important than the content. There is a fight between forum and content, between commercial interest and public interest.'

She added, 'In Iraq for instance, is it really in the public interest to show all the killings which may lead to more killings? Where does responsibility come in? You need to judge between commercial interest and public interest.'

What this shrewd woman is doing, really, without anybody seemingly taking serious notice, is to hide behind her feminine charm to hit out at the media, especially the western media, for fuelling human conflict in order to gain competitive market advantage, rather than care so much about the critical issues that matter to the society. This is almost accusing the media of blue murder with smiles!

She recalled the time when Slovakia was still behind the Iron Curtain and listening to the Voice of America and Radio Free Europe in their communist enclave constituted what she uniquely called 'Island of positive deviation'. But still, she has some reservation about democracy without ethics and media freedom without moral limitations. 'Democracy without ethics is no democracy,' she declared flatly. 'You can have perfect media laws but that does not guarantee freedom if there is no ethics and morality. Is everything to be published or not? That is the root of human rights.'

Simply put, Radicova insists that unrestrained media is as much a threat to democracy just as a fettered media. 'Democracy is like love-if you don't care for it, you will lose it. It is not obvious that if you have the lady called democracy, you will always have her no matter what you do to her.'

After more off-the-cuff peroration, Radicova was done. A standing ovation. Question time. She fielded questions from many of the media gurus that included CNN's Jim Clancy who stood in for the legendary Dan Rather who took ill; Errol Barnett, another CNN anchor and Sarah Montague, BBC anchor. Iconic patrons like Harold Evans voted the world's greatest editor of all times by the British editors, Raymond Louw of the famed South Africa Report, Peter Preston, director of The Guardian (UK), among others, were always around.

The questions thrown at Radicova were dealing mostly with European issues, so which one concerns us from Nigeria where elections are still like voodooism that can only be tamed by the courts, where infrastructures are in a shambles, where governance and power are the only thriving industry replacing manufacturing and services?

Suddenly from the blues, the moderator recognized Mike Awoyinfa's hands. I wondered if he was finally going to propose his love to the prime minister after all. Remember how he was swooning after her earlier? But, instead of love, Mike fired a question that seemingly took the prime minister by surprise. A simple question really, but a direct logical deduction from her presentation. 'What is the worst thing ever reported about you by the media, the thing that hurt you most?'

Radicova is fluttered for a moment. Her emotions visibly well up and she seems shaken. Then, she steeled herself, tried to smile, but it was obvious that Awoyinfa's question had hit a raw nerve. She talked about how the media had beamed their searchlight on her family unfairly. As a public officer, she has no problem whatever the media reports about her -she asked for it when she offered herself for public office. But her family didn't offer themselves for public office, especially her only daughter, and so should be spared invasive media scrutiny. Why wouldn't the media leave her daughter alone?, she asked. Her pain was unmistakable, but I wonder what she was talking about. Is she asking for some kind of Utopia?

Democracy is like love -Radicova Again!
In Nigeria where a president or a governor's wife runs a parallel, although gender-based executive team complete with her mini-cabinet in terms of staffing, escorts and official convoys to boot, such distinction that Radicova is drawing is completely blurred. In which case, her family is a fair game.

Radicova's impassioned plea was only throwing me back to the reality that obtains in most part of the world. In the United Kingdom, for instance, the prime minister's wife keeps her full-time secular employment to beef up the family's income.

In her autobiography, CHERRY BLAIR: Speaking for Myself, Mrs. Blair recounted how she was not even allowed to use official stationary to write a letter adjudged strictly not official, not to talk of even having her letter typed by secretaries in her husband's office because as the British prime minister's wife, she just was not entitled to such expense from public purse. In effect, she does her own domestic duties. In fact, on one occasion, the Cabinet Secretary refused to approve a 2,000 pounds air ticket for Cherry and her secretary for a foreign trip partly subsidized for her by Laura Bush because the cabinet bureaucrats were not convinced that the trip qualified as an entirely official! Of course, we also heard that in USA, the Americans deduct the cost of feeding the president's family and their personal guests while resident in the White House from his annual $400,000 pay package. So, while Radicova and people whose job description is similar to hers could be entitled to plead that their family have a right to private life, in Nigeria where the families of elected officials double as powerful executives in power and expenditure from the public fund, can they be entitled to be left alone from invasive media scrutiny?

Afterwards, it was Awoyinfa's question that many seemed to talk about when they met us. It appeared to be an issue that would make news in the local media because several Slovakian journalists came later to discuss the satanic question with Awoyinfa -as we call such human interest questions. The lesson seems, once again clear to us, as if we still need reminding -all news is human! Human interest! What do you think?

Concluding Part: ME AND THE ROMAN GIRLS