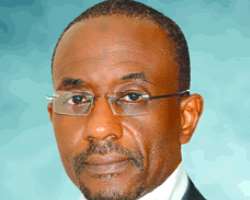 The leadership of the Senate yesterday demanded an unreserved apology from the Governor of Central Bank of Nigeria (CBN), Mallam Sanusi Lamido Sanusi, over his claim that the National Assembly consumes about 25 per cent of the nation's budget annually.

Towards this direction, Sanusi may be summoned by the Senate today to appear before it to explain to the nation how he arrived at the 25 per cent of the 2010 budget he attributed to the National Assembly.

Spokesman of the Senate told journalists at a press conference in Abuja that the allegation was unfounded and aimed at discrediting the federal legislature with a view to bringing it into disrepute before members of the public.

Senator Eze explained that the 2010 approved budget as amended is clear for any discerning mind to study, analyse and to critically evaluate, stressing that the total budget allocated to the entire National Assembly as an arm of government that included its bureaucracy, the Commission, members and staff of the legislature is just about 3.5 percent and not 25 per cent as alleged by the CBN governor.

The Senate spokesman further said: 'Otherwise, I do not see how that kind of figure can be bandied about by the Governor of the Central Bank, who is supposed to be in a position to gauge and hold the reins of the fiscal health of this country. If it is true that he said so, it is very embarrassing. I think that Nigerians have the right to say what they want to say, but they need to know that one person's right stops where the other person's right begins.'

Senator Eze explained that while it is not against the law to criticise somebody, it is, however, unjust to hang anything on the National Assembly, as an institution all in an attempt to drag it down.

'This is pure fallacy. I do not know where this fabrication is coming from and he did say that the National Assembly has taken 25 percent of all the overhead cost. And I want to state that the total overhead cost of the federation is N2, 137, 574, 700, 030. So even if you look at the whole budget of the National Assembly as a percentage of the entire recurrent of the federation, you cannot get 25 percent no matter how you push this figure. So I do not know where this figure is coming from.

'The Senate and the National Assembly expect the CBN Governor to retract this very fallacious and very damaging report with an apology because he does not have a foundation in facts. I expect that Nigerians should be able always to ask questions and be critical when facts are presented to them. If you have a budget of N4.4 trillion, somebody takes N0.1 trillion of that budgets; does that make it 25 percent?'

He described as most unfair the constant attempt to destabilise the National Assembly by some people whose duties he, noted, is aimed at pulling down the federal legislature which he stressed is unhealthy and unfair to the development of democracy.

'So I think that the orchestrated attempt to pull down the legislature is very unfortunate, it is uncalled for and I think that rather than focus on how we can move Nigeria forward, others are concentrating their energies on how they can pull institutions down. I think this is most unfair. This is not really what we expect at this point in time. We are talking about beefing up the power sector. We should be talking about giving infrastructure to our people. We should ask the implementers of this budget whether they are really applying this budget to the needs of our people, not fishing for trouble where do not exist,' he cautioned.

The CBN Governor Mallam Sanusi who spoke on 'Growth Prospects for the Nigerian Economy' was quoted as having said that 'if you look at the budget, the bulk of government revenue expenditure is on overhead. That is a big problem, 25 per cent of overhead of the federal government goes to the National Assembly. We need power, we need infrastructure so we need to start looking at the structure of expenditure and make it more consistent with the development initiative of the country.