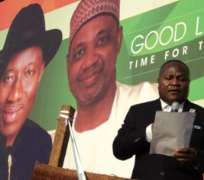 MINISTER of Defence Adetokunbo Kayode at the flag-off of the outdoor campaign for Jonathan/Sambo ticket in the Southwest zone at a ceremony in Akoko, Ondo State.

President Goodluck Jonathan and his deputy Namadi Sambo spent an unprecedented three days in Lagos together, holding series of meetings with PDP stakeholders after a string of court rulings had sacked three of the party's governors and installed the Action Congress of Nigeria in the government houses.

Sources said while the president met separately with stakeholders of the PDP in the six states of the zone, Sambo spent most of his time meeting with leaders of northern community in the region.

A source said the loss of the three states in succession means the party's grip in the south west has slipped, hence the President's long weekend in Lagos was meant to ensure effective damage control. The source added that the President also intended to take charge of his campaign in the zone from former President Olusegun Obasanjo.

However, sources said the meetings did not go on smoothly with at least delegates from Oyo and Ondo states on Saturday. The Oyo delegates wanted Jonathan to dump Governor Adebayo Alao-Akala, while a faction of the Ondo delegation accused the other of fraternizing with former vice president Atiku Abubakar.

Atiku media campaign office confirmed to Daily Trust yesterday the former vice president had met three times in Abuja with 17 of the 18 PDP party chairmen from Ogun, the last of which held last Thursday.

In Lagos, at the first meeting held with the anti-Akala group led by Senator Lekan Balogun, President Jonathan was told not to allow the governor to run for second term in office because that would jeopardize the chances of the ruling party in the state.

Sources said that the first meeting which was purely a PDP affair took place at Dodan Barracks in Lagos where Alao-Akala's supporters and opponents led by Senator Balogun were billed to meet with the President.

The second meeting was between the President and the Chairman, Oyo State Council of Obas and Chiefs, Oba Lamidi Olayiwola Adeyemi and the Aare Musulumi of Yorubaland, Alhaji Abdul-Azeez Arisekola-Alao.

President Jonathan reportedly sued for peace among the party leaders for the PDP to emerge victorious in 2011 and subsequent elections in the state.

Those who spoke were unanimous in their call for the full implementation of Ike Nwachukwu-led PDP National Peace and Reconciliation Committee as solution to the crisis in the party, and also the non-fielding of Akala as party's flag bearer for the 2011 gubernatorial race.