I cried when I lost Zain N5m prize money – Waje 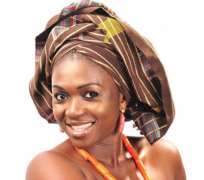 She may not have a single album to her credit, after a decade of sojourning in the music scene. But Aituaje Iruobe a.k.a. Waje is a name that cannot be ignored.

The rising female act is optimistic that she'd break grounds in her chosen career. In this encounter, she speaks on her forthcoming album, her music and why she's not married yet.

First of all, Waje is a female and in her late 20's from Sabongida Ora in Edo State. Her dad is from Edo, while the mum hails from Onitsha, Anambra State. I grew up in Benin, Edo State and attended Word of Faith Group of Schools, where I started my musical career as a choir member.

While at the school owned by the late Bishop Idohasa, I got a scholarship due to my singing prowess. I've always loved singing and my dad used to beat me a lot, because I was using screw drivers to drill holes on our walls and turn that into my imaginary microphones.

From Benin, I moved to the east with my mum when she and dad separated. I got admission to study at the University of Nigeria, Nsukka, where I graduated with a degree in Social Work.

Waje: I've learnt not to blame anybody for my mistakes and short comings

So, I'm a social worker-turned singer. I sincerely believe that there is a lot that I can do as an entertainer with what I actually studied. When the time comes, I would definitely return to doing charity works. My names are Aituaje, Ebele, Iruobe, Vivian, Aina Waje.

When I discovered my talent in music!

I just realised I could sing, but I can't exactly remember at what age. But based on my Christian background I started quite early from the church. I was a member of the Children Evangelical Ministry and I sang at our Easter Camp Meetings. And as a child I also danced a lot.

Professionally, I started singing in 2007 and that was when I did a re-mix of P_Square's Omoge Mi, which I called Bobo Mi.

Prior to this, I was with an eastern–based label called Dome. I met them when I was young, 19. They helped to groom and nurture me, but I left them this year.

We had a contract but I did not release any album with them, but I had two singles, Somewhere and Kolo released on their label. Kolo was originally recorded by MTV Base.

It was my song for their Advance Warning competition that I participated in. We were told to write our own songs and record it during the competition. Kolo was recorded at SABC studios, South Africa.

Immediately after the competition and after emerging as the last woman standing, I decided to drop Kolo as a single and the result/reception was overwhelming. My debut single, Somewhere, was dropped last year.

You were with Dome Records for a very long time, did the feeling of not dropping your debut album with the label hurt?

It definitely weighed me down. I was born on September 1, and on every day of my birthdays, I usually think back and very deep. But I've learnt not to blame anybody for my mistakes and short comings.

I would have come out with an album a long time ago. I would have also craved to get good dividends for my singles. It was not entirely there and having patiently waited for my contract to expire, and I took a walk.

So, who are you with now?

Recently you hooked up with Sam Kargbo Productions. How true is that?

We are still talking and reviewing the offers they put on the table. To be very honest with you, I've got about four labels currently discussing with me. They all want to sign me on and three of them are very big and Sam Kargbo is one of them.

Your hot single Kolo is everywhere and making waves. What was the inspiration behind the song?

The inspiration for that song is the womenfolk. I like to represent the girls. In a certain way, I'm a feminist. Let's face it, in everything that happens in this world there is a woman behind it, good or bad. But you have to look for a way to make sure that you channel the good part of it as a woman. I was thinking of a good club song that would at the same time represent the womenfolk.

I wrote the song with the help of Cobhams. He was the music teacher in the house at Advance Warming, while a South African produced it.

Talking about Advance Warning, what was your experience in the house like?
It was fun for me because I was surprised when they called me to be part of it. I was still staying in Enugu State then.

As at the time I got the offer, I had already done Do Me with P_Square and Somewhere, was just out then, and was being played by only MTV Base.

More than 20 persons that included heavyweights like Kel, Terry G, MI, Pype and Blaze were invited for the Advance Warning event. Initially, I feared I didn't stand a chance among the heavyweights because I was relatively new compared to most of them.

That Durella beat me in the finals made me feel very sad. In fact, I cried like a baby. I had already planned what to do with the prize money. But I moved on with my life and career after the quest.

With more than a decade experience in the industry, you are yet to drop a full album . . .
It's going to drop this year before the end of this year. The album will be a self_titled album, Waje. I feel its about time for me to be heard

Are you ready for marriage now if the right man comes your way?

Let me put it this way, if he comes my way and is the right person; I will give it a serious shot.

So, how are you coping with advances from your male admirers?

Frankly speaking, I haven't seen anyone. My ideal man must be very confident, principled, responsible and God fearing.