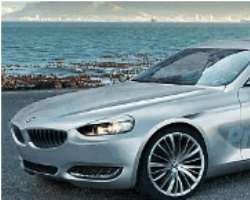 •BMW 6 Series
The new BMW 6 Series Convertible comes as standard with Drive Dynamic Control, which allows drivers to choose their own suspension settings, while the Adaptive Drive system is available as an option with electrically controlled dampers and roll stabilisation. In addition to the standard-fitted electromechanical power steering, another unique feature in this segment is the optional Integral Active Steering system.

It also underlines its progressive character with numerous BMW ConnectedDrive features that none of its rivals can match. The selection of optional driver assistance systems includes a rearview camera, Surround View, BMW Night Vision with pedestrian recognition and BMW Parking Assistant. The new BMW 6 Series Convertible is the only car in its segment to be available with a Head-Up Display.

Making its debut in the new soft top, the latest generation of the system uses a broader palette of colours and three-dimensional graphics to create an even sharper image. The luxurious yet dynamic driving experience of the new BMW 6 Series Convertible is reflected in the athletic elegance and sense-tingling sportiness of its exterior design. A long, sweeping bonnet, set-back passenger compartment, long wheelbase and flat waistline combine to create the proportions typical of a BMW convertible.

The precise interplay of eyecatching lines and meticulously sculpted surfaces help to give the new BMW 6 Series Convertible its arresting looks. The standard xenon headlights of the new BMW 6 Series Convertible pick up on the brand's familiar 'twin round' look. As standard, an accent strip cuts across the top of them; this is replaced by an LED accent light if the optional Adaptive Headlights are specified.

The new BMW 6 Series Convertible is designed to be a 2+2-seater. Its interior offers individually tailored seats for the driver, front passenger and rear passengers. High-quality materials, carefully coordinated colours and, once again, meticulously formed surfaces combine to produce an ambience defined by luxury, sweeping dynamism and stylish functionality. A hallmark BMW element of the interior design is the driver-oriented cockpit layout.

The central section of the instrument panel, containing the iDrive system's Control Display, the central air vents and the controls for the audio system and air conditioning, are all angled slightly towards the driver. Added to which, the gearshift lever and the buttons for the parking brake, roof operation and Drive Dynamic Control are located on a surface that opens out towards the driver and is set lower than the front passenger side of the centre console.

The front passenger area is bordered by a surface curving elegantly from the armrest over the side edge of the centre console, upwards and outwards into the instrument panel and then horizontally into the door trim. This provides a harmonious surround for the front passenger area, creating a The new BMW 6 Series Convertible is fitted with newly developed lightweight seats with an integrated seatbelt system, and the seats are available in three variants. As an alternative to the standard items, there iare also sports seats with integral head restraints or comfort seats with a wider range of adjustment.

Instantaneous power development and majestic torque are the stand-out features of the two engines available for the new BMW 6 Series Convertible from launch. The V8 powerplant and six-cylinder in-line unit both have BMW TwinPower Turbo technology and direct injection, and combine their sporting character with outstanding smoothness and exceptional efficiency.

The BMW range is provided in the Nigerian market by Coscharis Motors.