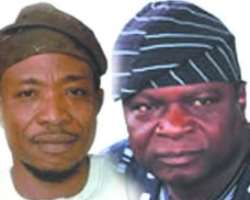 • Aregbesola and Oyinlola
Security has been beefed up in Osogbo and Ibadan as the Court of Appea,l sitting in Ibadan, Oyo State, is set to deliver the long-awaited judgment on the disputed April 14, 2007 Osun State governorship election today. The Action Congress (AC) candidate in the, election, Rauf Aregbesola, has filed an appeal against the emergence of Governor Olagunsoye Oyinlola as the winner of the poll.

Tension has enveloped the two state capitals, following news that the dispute, which had dragged for months, would finally be laid to rest with supporters of both parties apprehensive of which direction the pendulum judgement would swing.

In Ibadan , the seat of the appellate court , heavy security has been sewn around the court premises in Iyaganku GRA to forestall any breakdown of law and order. This is apparently informed by the decisive and volatile nature of the case and past experience with supporters of the two factions.

Mobile policemen and other security agents had been providing security at subsequent court sittings following past bloody clashes by supporters of the governor and his challenger. Oyo State Commissioner of Police, Baba Adisa Bolanta, said in a phone interview sufficient men had been drafted to ward off any form of disturbance before, during and after the judgment. Bolanta, who warned any of the political parties planning to disrupt the peace in the state to have a re-think, said the law was there as no respecter of anybody.

According to him, the police would draft both plain clothed and uniformed men as well as their animal security (Horse) unit to o ensure that law and order prevailed at the venue and around the state. 'We have put adequate security measure in place to ensure that there is no breakdown of law and order. Let me just advise those coming to Oyo State to cause trouble to have a re-think as the law is there as no respecter of anybody. We will ensure that law and order prevail before, during and after the judgment. There are enough security measures already put in place for the judgment. I will not tell you the figure of my men drafted for that assignment but let me tell you that we are using both conventional, plain and animal security unit of our command.'

Aregbesola had challenged the judgment of the Election Petition Tribunal, which upheld Oyinlola's victory in an initial petition brought before it.

The appellate court had reserved judgment in the appeal, after counsels to both parties submitted and adopted their addresses before Justice Clara Bata Ogunbiyi, who presided over the matter in company with other members of the panel, Justices M. R. Garba, P. A. Galinje, C. C. Nwabueze and A. Jaure, three weeks ago.

Although they could not be reached by press time to confirm it, Daily Sun learnt that the chambers of Yusuff Alli (SAN) and Akin Olujimi (SAN) representing the litigants were informed by the court early in the week, for the judgment today.

However, sources within the Osun State PDP and Governor's office as well as the Oyo State Police chief, Bolanta, confirmed to Daily Sun last night that the judgment had been fixed for today. Adopting his address before the court, counsel to Aregbesola, Olujimi, had urged the court to rely on the minority judgment at the lower tribunal which declared the AC candidate as the winner of the 2007 governorship election in the state.

He argued that the failure of INEC to call evidence against the allegation that the election was marred by irregularities in the 10 local governments being challenged by Aregbesola implied that they agreed with the allegation. According to him, the lower tribunal failed to consider the avalanche of evidence presented to it, particularly at the Boripe and Atakunmosa West Local Government, Areas where, he said, the number of registered voters was 6,631 but INEC returned 14,497 as votes.

While urging the court to allow the appeal and declare Rauf Aregbesola as the lawful winner of the election, the lawyer said the petitioner had proved his case that the election in the contested council areas was fraught with massive irregularities. Counsel to Governor Oyinlola, Alli (SAN), argued that the totality of the appellant's evidence had failed to prove the case before the tribunal.

He said the evidence of the forensic expert called by Aregbesola could not be relied upon having said that only 10 per cent of analysis was done on the ballot papers sent to it. According to Alli, it was not only enough for the petitioner to bring avalanche of evidence before the court, he must be able to link the evidence with the cases which he said the appellant failed to do.

He, therefore, said the reliefs sought by Aregbesola were declaratory in nature, adding that evidence must be led and proved to the satisfaction of the court. INEC counsel, Ayodeji Bobaderin, said there was no need for INEC to call witness since the petitioner had failed to prove his case before the court.