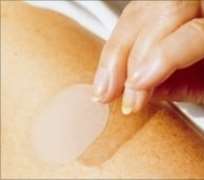 HRT is used by around one million women in the UK

Sex hormones taken by women after the menopause may make their brains “younger”, researchers claim.

A small study of post-menopausal women found those on HRT performed better in tests measuring how the left and right hand sides of the brain work together.

Psychologists at Durham University say it mirrors the brain activity of younger women who naturally produce the sex hormones in their bodies.

The research is published in the journal Hormones and Behavior.

The study involved 62 post-menopausal women aged between 46 and 71.

Of these, 36 were on hormone therapy, while the rest were in the control group. All were right-handed.

They were asked to carry out fine motor coordination tasks, such as tapping buttons with different fingers using both their left and right hands.

The researchers say both hands performing together equally was a sign that the two brain halves were interacting more.

This was found to be more pronounced in the women on HRT.

Dr Daryl O'Connor
University of Leeds
It suggests sex hormones open the gateway between the left and right sides of the brain, encouraging interaction between the two halves, says the Durham team.

Lead researcher, Dr Markus Hausmann, said: “Sex hormones are powerful in changing the way the brain is organised, and can affect not only sexual and reproductive behaviour but also cognitive functioning.

“The tests with postmenopausal women show that hormone therapy can help both sides of the brain pull their weight, much in the same way as the brain organises itself in younger women.

“We hope to establish whether sex hormones can make the brain less vulnerable to the effects of stroke and other injuries by 'sharing' the load between the two hemispheres as women get older. However, more research is needed on this.”

Dr Daryl O'Connor, a psychologist at the University of Leeds, said they were “potentially very important findings which indicate that the influence of sex hormones may extend beyond sexual and reproductive behaviours”.

But it was too early to say whether HRT, in this context, would yield benefits for women in terms of stroke or other injuries, he added.

He said: “It is essential that the current results are replicated and that researchers explore how these changes in brain functioning may actually translate into clinically meaningful health benefits for older women.”

It is thought that around one million women aged over 50 in the UK take HRT to relieve the symptoms of the menopause.