CESC FABREGAS AND EMMANUEL EBOUE RULED OUT WITH INJUJRY 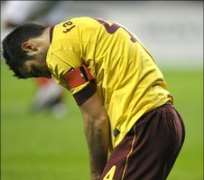 Skipper Fabregas picked up a hamstring problem
Arsenal midfielders Cesc Fabregas and Emmanuel Eboue will be out for two and four weeks respectively after picking up injuries in the 2-0 defeat in Braga.

Gunners boss Arsene Wenger told Arsenal TV Online: “Fabregas will be assessed. After that we can tell how long he will be out, but I count two weeks.”

“Eboue has a medial knee ligament strain. I think it will be four weeks.”

Wenger selected Fabregas despite the Spaniard's on-going fitness troubles and admitted it had been a gamble.

After the game the Frenchman said: “It's disappointing because I had a hesitation to play him but I took the gamble and it backfired on us.”

He later added: “It is a big blow because it will question how cautious we have to be in the future with him.

“Cesc has played 50 games a year since a young age. We may have to be more cautious with him, especially in the next two months.”

Arsenal needed a point to secure qualification for the knockout stage but they conceded two late goals in Portugal.

Brazilian striker Matheus scored both, the first in the 83rd minute and the second deep into stoppage time in the Estadio Municipal.

Arsenal will still qualify for the knockout stages if they beat Partizan Belgrade, who have lost all five games so far, in their final group game at The Emirates on Wednesday, 8 December.

A draw will be enough for the Gunners if Braga fail to beat Shakhtar Donetsk in their final game.

However, if Shakhtar Donetsk avoid defeat, Arsenal would only be able to finish second at best and would face a group winner if they qualify – and so could face the likes of Real Madrid or Barcelona.