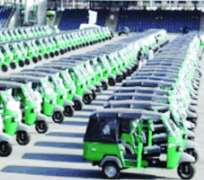 Lately the National Agency for Poverty Alleviation (NAPEP) is being smeared with allegations that portray it as a corruption-ridden agency and, perhaps, a failed project.

The accusations have since put NAPEP in the radar of Economic and Financial Crime Commission in the past year. One of the prime issues is the sum of 417 million naira allegedly owed NAPEP by a certain Trimidan Limited allegedly masking under Keke Owners and Riders Association of Nigeria[KORAN], a loan to which the Agency is allegedly keeping a blind eye.

But the National Coordinator of NAPEP Dr Magnus Kpakol told Daily Sun that the allegation were hogwash, insisting that he had been at the forefront of recovering the money. He said it was ironical that anybody could accuse him of looking the other way 'when I actually wrote the Attorney-General of the Federation on the matter urging him to direct the EFCC to go and recover the money'.

Kpakol said he had initiated legal action against one Mr Ofili Okonkwo a businessman for plastering him with accusations of corruption and specifically colluding with the said Trimidan to perpetrate fraud.

The story of Napap started way back in year 2000 When the President Olusegun Obasanjo administration received a proprietary master plan from Autobahn Techniques Limited , for poverty eradication, technology acquisition and youth empowerment.

Keke NAPEP, which is only an aspect of the whole concept of NAPEP, was supposed to be its flagship, and thus according to Presidency sources, has had more impact in the poverty alleviation programme, but unfortunately has been a thorny issue. This is evident in the fact that NAPEP has been the subject of Economic and Financial Crimes Commission (EFCC) investigation in the past one year. As far back as 2009, the crisis in NAPEP had attracted the attention of EFCC following the revelation in media things were not being done properly. Chief of the allegations is the foregoing is the foregoing allegation of N417 million for which Dr. Magnus Kpakol, initiated an investigative panel.

The panel, which was made up of the top echelon of NAPEP Management, was chaired by Dr. Dan Mou, who is the Secretary of Programme, NAPEP and Chairman of Delegation, Ndako S. Aliu, who is Director of Finance & Accounts of NAPEP. Halilu M.L, Director, CPD; Other members included Mrs. Obayagbo, legal Adviser to mention a few. The committee was said to have turned in a very courageous and transparent report.

Part of the repeot read thus: 'Sequel to the report on the KEKE NAPEP Project presented to the National Coordinator and the discoveries of abnormalities, especially a staggering debt of N417m yet to be paid by KORAN, the National Coordinator directed that a high powered delegation visit Autobahn Techniques Ltd and KORAN with a view to reiterating the displeasure of the Management of NAPEP on the low rate of recovery on the sales of the KEKE NAPEP tricycles and the need to conclude the delivery of the balance of the KEKE tricycles'.

This is in addition to the fact that the Keke Owners and Riders Association of Nigeria (KORAN) was under investigation by the EFCC over a controversial factory owned Trimidan Limited, allegedly built with the money realized from the sale of 5,000 tricycle distribution contract awarded by the agency in 2008. The panel in its report observed that 'on arrival at the purported premises of KORAN in Sango Ota, the team was struck by the edifice which was not called KORAN office but Trimidan Limited, a private limited liability company owned by Alhaji Akinola. The Team was also showed photographs of the official opening of the complex but again no representation from NAPEP was seen in any of those photos. Also the National Coordinator's portrait is displayed in the KORAN President's office'.

The panel added: 'another observation of the team was that this new company, Trimidan Limited was currently assembling KEKE tricycles, painted them in National colours and titled them 'KEKE NAPEP' yet NAPEP was not aware of such assemblage neither was it informed by Alhaji Akinola. Also observed were a number of these privately assembled KEKE titled 'KEKE NAPEP' in the national colours said to be on route to Port Harcourt for delivery. Suffice it to state here that this is impersonation which is a criminal act by Alhaji Akinola. Also the states seeing the KEKEs in national colours and titled 'KEKE NAPEP' would believe they belonged to NAPEP. This again is misrepresentation and deception which is criminal'.

Many questions few answers
The panel report has actually thrown up some fundamental questions that are crying for answers and could actually help NAPEP in its future dealings. Since NAPEP was not aware of the company Trimidan Limited and the fact that it was fronting KORAN, how come Kpakol was invited to the commissioning of the office. Kpakol's accusers are implying that since he is the political head of NAPEP he was aware of Trimidan and actually endorsed it and flagged it off as a special guest of honour.

And as if to acknowledge Kpakol's support and involvement, Kpakol's portrait as observed in the panel report was hanging in the office of the company, and not that of Otunba Gbenga Daniel or President Goodluck Jonathan. Kapakol told DAILY Sun that the foregoing is laughable because most companies that deal in poverty alleviation matters always put his photograph, perhaps, to show affiiaton with the agency.

The panel report referred to a staggering debt of N417million owed by the owners of Trimidan, which is the crux of the investigation both by the EFCC and the visitation panel. The puzzle which the EFCC are trying to unravel amongst others is: under what circumstance was this debt accumulated, and who facilitated the diversion of such a staggering sum belonging to the Federal Government to a private company or persons?