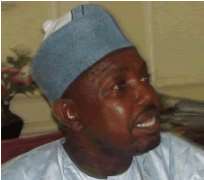 A stalwart of the Congress for Political Change (CPC) in Borno State, Waziri Bulama, has said the party would spring surprises in the state in the 2011 general elections. He claimed that the general disenchantment with the ruling All Nigeria Peoples Party (ANPP) would compel the people to yearn for a change in CPC. Excerpts:

In 2003 you contested and lost the House of Representatives seat on the platform of Alliance for Democracy (AD). You joined PDP and now you are in CPC. Why these changes?

I left PDP because the politics played in the party is purely an intra-party one. By this I mean a kind of politics based on dominance and control. It is not politics of issues and problems confronting our people. Essentially, I left PDP based on issues not because of my interest or against anybody's interest.

They don't play my kind of politics about promoting internal cohesion, inclusiveness and ensuring party unity. Unfortunately that kind of thinking is not there in Borno PDP. Personally, my relationship with the people in the PDP is still excellent. My problem with the party is that it focuses more on intra-party politics and not on inter-party politicking. That is why intra-party strife is rife in the PDP and it is so deep that it goes violent a times. I seriously feel that there is no hope of bringing positive change and succour to the people of Borno in PDP because the focus is strictly on party control and dominance.

I have heard my people saying I am going for the governorship but the decision is not mine to take for now. I always insist on enhancing the party first. I don't want to repeat the kind of mistakes being made in the PDP. If I had wanted to promote myself I would have done that in the PDP. I could have built a group bigger than that of Kashim Imam or Saidu Pindar or Ibrahim Bunu or any of these other gladiators in Borno PDP. I could have had my own formidable group if that is what politics is all about. I started in Mala Kachalla's time. People know my family very well, I mean the Waziris.

What then is your ambition for the 2011 polls?
My ambition is for the CPC to mobilize our people to change government in Borno State so that we could bring our people out of this condition of hopelessness, fear, poverty, illiteracy and insecurity. Nursing political ambition to me is not the decision I should take unilaterally.

It is the people whom you seek to represent that are better placed to decide on such issues. But if my family, friends, associates and the people say I should contest, I can contest for anything so long as my interest rhymes with the overall interest of the party. So long as my candidature will engender the needed support to put us on a better footing and add value to the party. Talking about my ambition now is like admitting that I left the PDP because of my personal ambition or interest. I am a team worker. I am not doing politics because I lack anything.

How prepared is the CPC to effect changes in Borno State?

Writers of power say that there are different sources of power. The CPC in Borno enjoys what is called peoples power. The CPC has accessibility, it has mass appeal the appeal for freedom. People's power is one kind of power, while violence is power, money is power, expertise or knowledge is power, bureaucracy or the instrument of government like the gun is power. But people's power overshadows them all.

Throughout the world, you see there are certain leaders who have wealth and control the instruments of terror and fear yet you see peoples power coming to overthrow them. Think of the Shah of Iran, Mobutu Sese Seko of Congo and many despots and tyrants. Our people in Borno State and other states of Nigeria are living in a state of tyranny and under forces of violence. The CPC has peoples' power, and we are going to change the unfortunate situation here in Borno.

We are going to make people understand their capacity to influence change in their society. They can bring about positive change without using any form of force. Mahatma Ghandi changed India through non-violence means. Alhaji Mala Kachalla ruled Borno State without violence, discrimination and without hurting anyone. He ruled peacefully, and he voluntarily left government at a time people expected he would resort to violence to keep himself in power. It wasn't because he was defeated, but because he said he was disenchanted with the extent people go to gain political power; he deliberately withdrew.

In this Maiduguri in 1956, there was a man called Ibrahim Imam. He was an engineer, and the secretary of the then Northern People's

Congress (NPC). He resigned from the NPC which was then led by the late Sardauna of Sokoto, because the NPC was so sympathetic to the traditional rulers, and by that time their activity as a political party was oppressive. He came back to Maiduguri and formed Borno Youth Movement. He had no money but he was able to effectively mobilize people to understand the need for a change. When the next election came for picking candidates to represent the various provinces and constituencies in the country, in Maiduguri, the Borno Youth Movement fielded some candidates too.

The late Sir Kashim Ibrahim who was once the governor general of Northern Nigeria was appointed to come and become the Waziri of Borno. By then he was the most powerful person, because the Waziri office was the administrative head and by that time, since it was pre-independence, the system of government then was indirect rule. Kashim Ibrahim contested an election to represent one part of Maiduguri because Maiduguri then was divided into northern and southern Maiduguri - starting from the Shehu's palace. In northern Maiduguri Kashim Ibrahim stood for an election on the platform of the NPC, the Borno Youth Movement fielded an ordinary senior driver, one Alhaji Baba Basharu. The father of the present PDP state chairman, who had previously worked under Ibrahim Imam. They went for an election, and despite the support of the then colonial government and the traditional institution, this senior driver of the Borno Youth Movement defeated Sir Kashim Ibrahim.

In Maiduguri South, the Borno Youth Movement fielded Ibrahim Imam against one Alhaji Dori, a very rich Hausa businessman and again Borno Youth Movement won the seat. So the two seats were won by the new party that enjoyed neither the colonial government's nor traditional institutions' support.

In 1979, the GNPP and the NPN came. The GNPP was a local party here with Waziri Ibrahim as the leader. Most of the youths were in the GNPP, while all the top businessmen like Alhaji Mai Deribe, Alhaji Umar Ali and so on, were all in NPN. The NPN fielded the former Inspector General of Police, the late Kam Selem as their governorship candidate, while the GNPP brought an ordinary civil servant, Muhammed Goni, and the GNPP defeated the NPN. This is a clear demonstration of the fact that if there is people's power all things are politically possible.