RAILWAYS TO GET Â£8BN INVESTMENT 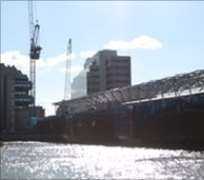 Plans for £8bn of investment in Britain's railways have been announced by the government.

It is buying about 2,000 new carriages to tackle overcrowding, electrifying some lines and pressing ahead with the Thameslink programme.

But plans to modernise the London-Swansea line are still on hold and it will be the end of the decade before the investment is complete.

Passengers also face rises in ticket prices to help pay for the investments.

Patrick Butcher, finance director at Network Rail, which owns all of Britain's rail infrastructure, was pleased with the announcement.

“We welcome the fact that the government recognises that the railway plays an important role in driving economic growth and this investment proves that,” he said, after Network Rail announced half-yearly profits of £299m – more than double the amount it made in the same period last year.

“The reality is that the inflation-busting fare increases kick in within weeks while the infrastructure and upgrade works we need to drag the UK's railways out of the slow lane are light years away,” he said.

In Northern Ireland, transport is a devolved matter with the Department for Regional Development responsible for investment in rail infrastructure.

New carriages
The government had put many rail investment schemes on hold while it decided which it could afford in the face of budget cuts. Now we know that more than 2,000 new carriages are being bought, with 1,850 of them being used to provide extra capacity.

Those carriages will not arrive instantly though – they won't finish coming into service until 2019.

Transport Secretary Philip Hammond admitted that it was a “rolling programme” but said passengers would start to see the benefits “within the next few months”.

Some 600 of the new carriages are for Crossrail (the new line being built east-west across London), up to 1,200 for Thameslink (the north-south link across London) and 650 will be given to different franchises around the country.

Those 650 carriages will be used to serve commuters travelling into the big cities.

But the government cannot say precisely which franchises will get what.

Although the new carriages will be given to the franchises, and represent good news for passengers – the train companies will want extra money from the government to run them.

So ministers will now negotiate with franchises to get the best deal they can – and that will determine in part where the carriages go.

Those carriages will increase capacity on the network by 17%, enabling an extra 185,000 passengers to be carried at any one time.

Thameslink green light
The Thameslink project is also going to go ahead in full. This will eventually double capacity on the route from Brighton to Bedford, allowing up to 24 trains an hour.

Work on the scheme is already underway, but there had been question marks over whether the rest of the stages would go ahead.

It won't be completed though until 2018 – two years later than planned. That delay means the engineering work is easier, and cuts costs.

There is also news that lines in the north west – from Manchester to Liverpool and Manchester to Blackpool – are going to be electrified.

Electric trains have an operating cost roughly half that of their diesel equivalents. They are also more reliable and can fit more passengers on board.

The government is deciding whether to replace the intercity fleet with electric trains, or electric-diesel hybrids. Whatever it decides will determine what happens to the electrification of the route into South Wales.

Passengers face an average fare rise of 6.2% in the new year, with some commuters seeing their tickets go up by as much as 12.8%.

The government says these fare rises are necessary to safeguard the investment that has just been announced.