AS THE ACN GOES FOR CONVENTION 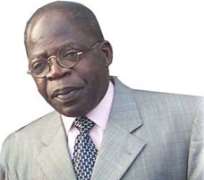 Tinubu
The convention
To be christened; Edo 2010, the Action Congress of Nigeria (ACN), will, by the last week of December, hold its first ever elective convention after its change of name on August 9, 2010 from Action Congress (AC) to ACN.

The need for the change of name according to the party's National Chairman, Chief Bisi Akande, was borne out of the resolve to prevent the nation from drifting to a one party state.

Furthermore, Akande added that it was also aimed at 'facilitating the working together of our members with other political parties and groups in collaborative efforts and with a view to making it easier for all leaders of similar political views to fuse into one party before 2011 elections.'

Against this backdrop, the Edo 2010, will no doubt focus on how to tailor the event towards giving room to a working alliance with like minds with a view to win the centre in 2011.

Tinubu/Buhari factor
It is no more news or secret that the undisputable leader of the AC N and former Lagos State governor, Asiwaju Bola Tinubu is being positioned to run with the former Head of State, and leader of the Congress for Progressive Change (CPC), General Muhammadu Buhari(rtd) in next year's election.

This insinuation was reinforced last week when a national weekend paper reported that Buhari had rejected Tinubu as his running mate. But Buhari, in a swift reaction told Daily Sun in Lagos that 'there was no iota of truth in the reports.'

According to him, the talks on a working alliance was still on, when the reports came out, saying nothing concrete might come out yet from the parley until December ending when congresses and conventions of parties should have been concluded.

Buhari's response has confirmed that Buhari/Tinubu presidential ticket is likely, and thus, the ACN convention would be structured to accommodate its possibility of the ticket. Buhari speaks further: 'When you go into your archives, you will know that the party, CPC issued a statement that the party would not fuse with any party. But we prefer to discuss with groups of parties for any type of alliance that would identify within and then we negotiate and we form the alliance. We hope to do that by the end of December. I think by that time, INEC must have received all the names of those who are going to participate in all the elections.

Fashola factor
Although the event is supposed to be a national assignment, it is interesting to note that the second term of the Lagos State Governor, Babatunde Raji Fashola (SAN) has been in the front burner of pre-convention discourse.

Daily Sun can reveal that Fashola's name has been touted over whether to give him the second term ticket or not. But feelers from such meetings have revealed that Fashola, even in his absence at the meetings has been winning.

Indications that showed that Fashola would get his second term ticket was made evident recently by the National Chairman of the party, Chief Bisi Akande. In an interview with the defunct Weekly, The Spectator, Akande confessed, that left to him, Fashola would go for second term. He however quickly added that the party's guidelines to elect candidates were yet to be put in place.

Those who were said to be roo ting for Fashola's second term were said to have hinged their stand on the performance of the governor, which they believe has made Lagos a reference point for other states to emulate.

The inklings that Fashola had antagonists emanated from a political pressure group -The True Face of Lagos that claimed to be fighting for probity in governance.

The group, early in the year waged a fierce campaign of calumny against Fashola accusing him of profligacy and corruption, and submitted a petition to the state House of Assembly canvassing prompt investigation and impeachment of the governor, if found guilty. Critics of the organisation suspected foul play, saying its antics were calculated attempts at distracting the governor from the good job that has brought development to the state . To these critics, the intention of the group was to distract and cause him to lose focus and create an avenue for the party to deny him a second term ticket.

However, a concerned Nigerian, Mr. Richard Akinola, who is comfortable with Fashola's way of governance sought the help of the court to stop the Lagos House from probing him. In addition to that, the presiding Bishop, Mountain of Solution Ministries, Abiodun Alani Olugbenro has urged Fashola to ignore all the detractors who he said were out to make him lose focus. Speaking with Daily Sun in Lagos, the cleric said that 'some elements within the society are bent on causing confusion that can make him lose focus and derail from the onerous task of achieving a mega status for the state.'

According to him, if Fashola does not ignore them and remain focused in the task of bringing more dividends of democracy to the people of Lagos State, 'the innocent people of this state, including all the detractors would be adversely affected.' The Bishop, who is also the President of Lovers of Fashola Foundation (LORAF), informed that 'it is against this background that my foundation has concluded plans to mobilise five million people to march and sensitise the public about the anti-people activities of these elements within us.'

The cleric-cum activist wondered why a handful of people would want to put spanner into the works of a government that has become a reference point in Nigeria's politics vowing that 'we will not fold our arms and allow that to happen in the larger interest of the masses.' The LORAF boss therefore warned 'those he described as enemies of progress, who do not wish the people well to have a change of heart or face God and the wrath of the people in whom lies true sovereignty.'

While appealing to the people of Lagos to remain calm 'in the face of this unprovoked assault on our collective sensibility,' Olugbenro urged them to 'troop out en masse, rally support for Fashola and demand from him to make himself available for a second term in office.' Although the clergy man said he was never a member of the Action Congress of Nigeria (ACN), he called on the leadership of the party to provide a level playing field for free and fair party primaries, doubting if any party member would want to contest against Fashola whom he described as a performing governor.

The true situation of things, according to Olugbenro, is that the people of Lagos State, both indigenes and non-indigenes alike are pleased with what Fashola has been doing since his assumption of office in 2007, asserting that 'they want him to continue beyond 2011.'

Speaking in the same vein, an activist and general secretary of the Oodua Self Determination Group (COSEG), Mr. Razaq Oloko-Oba said it was unthinkable that anybody could be contemplating dropping a performer like Fashola!

According to him, People of Lagos State could not imagine anybody in his right senses dreaming of replacing Fashola for the 2011 election.

Akande/Osoba angle
The convention, Daily Sun learnt would place the seat of the National Chairman of the party between two tested astute politicians. A party chieftain, who does not want his name in print confided in Daily Sun that media juggernaut and former governor of Ogun state, Aremo Olusegun Osoba may slug it out with his former Osun state counterpart, Chief Bisi Akande for the chairmanship seat.

Our source however boasted that 'the convention will be the talk of the town, as transparency will be the order of the day and ours will be an example of pure internal democracy on display.'

Decampees
Besides the alliance arrangement, the party is also getting prepared to welcome some decampees to its fold.

An indication towards this is a recent report that a governorship aspirant on the platform of the Peoples Democratic Party (PDP) in Lagos State, Mr. Owolabi Salis has been itching to join the party. Although Salis has denied the reports describing it as false, malicious and outright fabricated concoction to tarnish his reputation, political observers believe that such moves are common phenomena in politics.