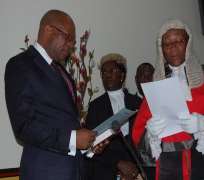 ASABA, Nov 24, (THEWILL) – Delta State Acting Governor, Rt. Honourable Sam Obi today swore in a new cabinet retaining 99 per cent of members of the cabinet he dissolved a few days ago. Obi however reassigned some of them to new ministries and departments.