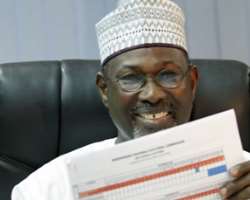 Chairman of the Independent National Electoral Commission (INEC) Prof. Attahiru Jega displays a copy of the 2011 Nigeria election timetable at a press conference in Abuja yesterday.

Presenting the timetable at a press conference, Chairman of INEC Professor Attahiru Jega said in line with Section 25 of the Electoral 2010, which gives the commission powers to determine the date of elections, the National Assembly election is to hold on April 2 while the Governorship and State Assemblies' elections will take place on April 16, 2011.

He said, 'Run-off elections to the office of Governor of a State and office of the President (if any) will be held within 7 days after the announcement of the result of the affected election.'

The timetable also provides that political parties will conduct primary elections to nominate their candidates between November 26, 2010 and January 15, 2011, while registration of voters in 120,000 polling units across the country will hold between January 15 to 29, 2011.

In accordance with Section 19(1) of the Electoral Act, the voters register is to be displayed for claims and objections from February 3 to 8, 2011.

The timetable also provides that campaigns by political parties in public commences on December 1 and is to end on April 1 for National Assembly election, April 8 for the Presidential election and April 15 for the governorship and state assemblies elections. Political parties will collect forms CF001 and CF002 which contain personal particulars of candidates and a party's list of candidates for all elections from December 15 to 22.

According to the timetable, the last day for submission of form CF001 which contains affidavit and personal particulars of candidates and form CF002 which has the party's list of candidates will be January 31, 2010 in line with Section 31(1) of the Electoral Act, 2010 that provides for not later than 60 days before the election.

Publication of Personal Particulars of candidates (CF001) for all Elections in accordance with Section 31(3) of the Electoral Act, 2010 which provides for publication within 7 days of the receipt of the form CF001 is on February 6.Parties are to collect nomination forms between February 7 to 10, 2011 and they are expected to submit nomination forms to INEC for all elections on February 21, 2011.

Also, publication of Notice of Poll for all Elections will take place on 18th March, 2011 pursuant to Section 46 of the Electoral Act, 2010 which provides that this be done not later than 14 days before the election.

The timetable provides that all political parties would submit names of their party agents for all elections to the Resident Electoral Commissioners (RECS) by March 25, 2011.

Professor Jega said the timetable was issued in exercise of the powers conferred on INEC by 'the Electoral Act, 2010 and of all other powers enabling it in that behalf' and that the revised timetable 'supercedes the earlier timetable and schedule of activities for the 2011 general elections issued by the commission.'

Yesterday's formal release of the revised election timetable is expected to kick start political activities towards the 2011 elections as it provides that political parties can begin the process of choosing their candidates this Friday. INEC had issued an election time table last August, under which presidential and all other elections would have held in January. However, the commission later asked the National Assembly to amend the enabling laws in order to grant it more time to organize the elections.

Note: (i) Runoff elections to the office of Governor of a State and office of the President (if any) will be held within 7 days after the announcement of the result of the affected election.