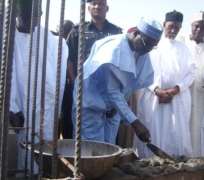 ABUJA, Nov 23, (THEWILL) - The Executive Governor of Kano State, Mallam Ibrahim Shekarau today performed the foundation-Laying ceremony of the Four Billion Naira (N4BN) ultra-modern Health facility in Kano as part of the settlement agreement entered into between it and Pfizer International Incorporated regarding the 1996 Trovan Trials.

Mallam Shekarau who spoke in Hausa to the admiration of the teeming crowd including victims of the Trovan Trials gave a vivid account that led to the current project and reminded the victims that their compensation would soon be settled.

Chairman of Pfizer/Kano Healthcare Program Trust Board, Professor A.S.A. Galadanci in his speech at the occasion expressed happiness at the realization of the project which will see Pfizer contributing immensely to the health needs, not only of Kano citizens but Nigerians at large.

He stressed that the Kano State Governor intensely negotiated a large compensation package for the victim of the Pfizer Trovan study, adding that a more important follow through of this negotiation which the general public is not fully aware of is that the Government also negotiated a large funding to the tune of $25.5 million (N3, 825,400,000.00) for the building of an ultramodern medical center, the first of its kind in Nigeria and indeed the West African sub region.

He said the Medical center when completed will have state-of-the-art Diagnostic equipment for the diagnosis and treatment of many conditions, including Cancers and Serious life threatening infectious diseases that are presently treated only in overseas countries of Europe and America.

“The general populace of Kano will now have the benefit of access to modern treatment facilities within their reach”, Professor Galadanci said.

Meanwhile the Proletarian Agenda and Mens Sana, Health Sector Civil Society Group have today commended the amicable settlement between Kano state Government and Pfizer Group which culminated in the realization of the today’s foundation laying-ceremony in separate statements made available to THEWILL.

Hajia Muslima Kadi, National Coordinator of Mens Sana said “as prime players in the health sector, we are delighted by today’s turning of the sod of the 200-bed medical centre under the supervision of the Healthcare Programmes Trust, the body set up by Pfizer Incorporated and the Kano State Government as part of the out-of-court settlement in respect of the 1996 Trovan trials. She stated also that the construction of the complex comprising a Diagnostic Centre, the Centre for Disease Control, the Public Health Laboratory, the Micro Biological Reference Laboratory and Staff Housing for the Centre will go a long way in improving healthcare delivery for the people of Kano and neighbouring states.

“We had been in the vanguard of civil society groups calling for a positive conclusion to the settlement process of the 1996 Trovan saga and we are delighted that both Pfizer and the Kano State Government have kept the faith. We salute the transparent method used in selecting contractors and consultants for the projects and hope that this would govern the rest of the process to ensure qualitative work and timely completion”, she said.

“It can be said without fear of contradiction that when the centre is completed Kano healthcare delivery will be positively transformed for the benefit of our people. We congratulate Pfizer and Kano State”.

“We call on all those foot-dragging on DNA test to cooperate with the Board of Trustees and submit themselves to the process so that the other leg of the settlement – the actual payment of compensation – can be concluded expeditiously.”

Also Danlami Balami representing The Proletarian Agenda, on his part commended Pfizer, and the Kano State Government for the epoch-making turning of the sod of the 4 billion Naira ultra-modern Healthcare facility in Kano, noting that something good was at last visibly coming out of the protracted settlement of the controversial 1996 Trovan trials.

Balami, said, “It is gratifying that Kano’s landscape will soon be graced by functional structures for disease control, diagnosis, laboratory analysis, reference laboratory and a housing estate for the staff of the healthcare establishment.”

Reviewing progress made on the compensation of patients who participated in the controversial Trovan trials, Mr. Balami called on the Trovan Victims’ Forum to withdraw their suits from the law courts and submit themselves for DNA verification so that genuine claimants could be receive the agreed compensation packages currently being stalled by litigation.

According to him, “Nothing positive can be achieved through acrimony; we didn’t need to blackmail anybody to get the health facilities being flagged of today. Let all genuine Trovan participants go for the DNA test and collect their compensation, stressing that “we are awaiting the lifting of the court injunction so that they can receive their deserved compensation.”