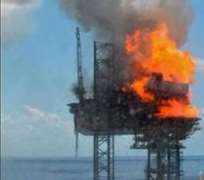 Engineers tried to stop the leak for 10 weeks before succeeding

The report said PTTEP Australasia, a unit of Thailand's PTT Exploration and Production, had failed to observe “sensible” practice.

The Australian Resources Minister told parliament the Thai firm should have its operating licence reviewed.

More than 400 barrels of oil a day spewed into the pristine Timor Sea off Australia's north coast for 10 weeks.

The oil hit the coast of Indonesia and East Timor.

Loss of control
“The widespread and systematic shortcomings of PTTEP Australasia's procedures were a direct cause of the loss of well-control,” Mr Ferguson said.

“Well-control practices approved by the regulator would have been sufficient to prevent the loss of well-control, however PTTEP Australasia did not adhere to these practices or its own well-construction standards,” he said.

The company paid $390m (£245m) for the clean-up but the minister said he thought relevant laws needed to be strengthened to make absolutely clear that companies would be held responsible for any future leaks.

He also criticised the Australian government regulator which had pursued a “minimalist” approach in handling the emergency, saying the entire incident had been avoidable.

There was no immediate response from PTTEP.
The government ordered the inquiry while environmentalists have expressed concerns about the waters off Australia's north-west coast, which are home to whales and dolphins.