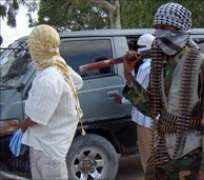 Kenyan police have been given until Friday to charge six Kenyans arrested allegedly on their way to join an al-Qaeda linked group in Somalia.

The group includes two school pupils and one person who also holds a British passport, police told the BBC.

The local police chief said the group was detained in the coastal town of Lamu, near Somalia's border, on Sunday.

He said it was the first time the police had detained Kenyans attempting to cross to Somalia to join al-Shabab.

The US considers al-Shabab, which controls much of central and southern Somalia, to be a terrorist group.

The BBC's Jamhuri Mwavyombo in Mombasa says the six Kenyans appeared briefly in court in the coastal city on Tuesday morning.

A judge granted a police request for more time to complete their investigation before charges are brought.

“They are believed to be students in Mombasa… aged between 15 and 30,” he told the BBC's Focus on Africa programme.

Kenya is home to many thousands of Somali refugees, and also has a large ethnic Somali population.