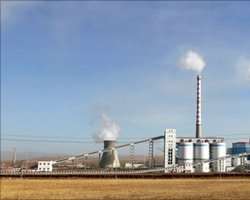 Further curbs on emissions are needed to hit climate targets, the UN warns

The promises countries have made to control carbon emissions will see temperatures rise by up to 4C during this century, a UN report concludes.

The report, from the UN Environment Programme (Unep), comes days before the opening of this year's climate summit.

It concludes there is a significant gap between what science says is necessary to constrain temperature rise and what governments have pledged to achieve.

But with extra political will, it says, warming could be kept much lower.

On Sunday, scientists released data showing that the recession curbed emissions from fossil-fuel burning by only 1.3% during 2009, and that they are set to begin rising again as the global economy cranks up once more.

Unep's analysis shows that even if governments implement all they have pledged to do, that would “…imply a temperature increase of between 2.5-5C [from pre-industrial times] before the end of the century”.

As the global average temperature is already about 0.7C above pre-industrial times, this implies that anything up to 4C during the coming century is possible.

Forward planning
Whichever way you slice it, it's clear that governments need to be doing more if they're to meet either the 2C or 1.5C targets'

“But what this report shows is that the options on the table right now in the negotiations can get us almost 60% of the way there.

“This is a good first step.”
Over the past year, Unep has pulled together projections from a number of research centres that model climate trends.

All use different methodologies; and although the results tend to be fairly consistent, Unep wanted to meld them into a more coherent whole that could inform negotiators who will shortly be flying into Cancun, Mexico, for the climate summit.

The projections begin with pledges submitted by governments to the UN climate convention (UNFCCC) under the Copenhagen Accord, the political agreement made last year at the Copenhagen summit.

Most of those pledges concern the level at which countries will constrain emissions in 2020.

Projecting forward from those pledges to the likely temperature rise in 2100 is an inexact science, because of uncertainties over how the climate system will respond to emissions, and because assumptions have to be made about what governments do beyond 2020.

Taking those into account, the report's main conclusion is that “emission levels in 2020 implied by current pledges do not seem to be consistent with 2C or 1.5C temperature limits.

“To stay within these limits, emission levels would have to be lower in 2020 and then be followed by considerable reductions.”

Different blocs of countries want the international community to commit to limiting the global average temperature rise since pre-industrial times to 2C or 1.5C, though a few are demanding 1C.

The projections suggest that in order to meet the 1.5C target, not only would emissions need to fall steeply and rapidly, but the world would need to be implement “negative emissions” – taking carbon dioxide or other greenhouse gases out of the air – in the second half of the century.

Mexico's Environment Secretary Juan Rafael Elvira, who will host this year's talks, commented: “The level of effort expressed in the Copenhagen Accord in terms of emission reduction is almost three times higher that what was achieved with the Kyoto Protocol, which is by itself very positive and shows some improvement.

“However, we need to formalise and, if possible, increase current pledges and translate them into commitments for developed countries and into acknowledged actions for developing countries.”

There have recently been signals that the biggest of all developing countries, China, is preparing to enact legislation limiting the rise in emissions.

But Tom Brookes from the European Climate Foundation (ECF), one of the centres whose projections are included in the Unep report, suggested that all countries needed to recognise the gap between their stated desire to keep temperature rises down and the pledges they have made on curbing emissions.

“It's not enough; whichever way you slice it, it's clear that governments need to be doing more if they're to meet either the 2C or 1.5C targets,” he told BBC News.

“And as well as making the kind of headline pledge they made for Copenhagen, the time is right for them now to be working out in detail how they are going to meet those pledges.”