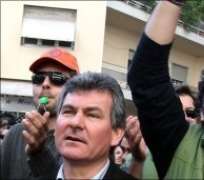 Greece's international lenders have agreed the latest instalment of a loan to the debt-stricken country, but say Greece must make “an extra effort” to address its deficit next year.

Greece will now receive the third tranche of that loan, worth 9bn euros.

But the government has had to agree new measures “to broaden tax bases and eliminate wasteful spending”.

In a joint statement, they said that the programme remained “broadly on track” and they expected the Greek economy “to begin turning around” in 2011.

In short, Greece is currently implementing a savage austerity package that will fail in both its aims. It will fail to arrest the ballooning debt crisis and it will do next to nothing to inflict righteous pain on the culprits'

Yanis Varoufakis
Professor of Economics, Athens University
Austerity: 'Doomed to fail'
They regarded as impressive the savings that the Greeks had made during a deep recession.

But the statement went on: “At the same time, data revisions for 2009 and weaker-than-projected revenue collection mean that an extra effort will be needed to meet the deficit target of 7.5% of GDP in 2011, which the government has reaffirmed.”

The international team believes that Greece is at a crossroads, BBC Athens correspondent Malcolm Babrant said, and needs to continue to make profound structural reforms.

In particular they want to see better tax collection as well as cuts in the national health service and the loss-making state-owned companies such as the railways.

The IMF believes these organisations are overstaffed and that in some cases employees are overpaid, our correspondent said.

IMF representative Poul Thomsen said there would have to be job cuts, but he hoped that they could be achieved by natural wastage, by replacing one of every five people leaving voluntarily.

The next review of Greece's progress is scheduled for February.

2011 budget
The Greek government has made efforts to cut its spending this year, which has led to violent protests and strikes throughout the country.

Last week, the government unveiled an austerity budget for 2011 which aims to cut health and defence spending, and increase the sales tax on most retail items.

On Monday, the Greek Ministry of Finance said the country's budget deficit for the year to October stood at 17.33bn euros.