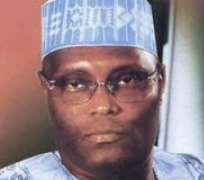 The announcement made at the Yar' Adua Centre in Abuja in the absence of the group's chairman was economical with details of the criteria used in picking Atiku, and the announcers declined to answer questions on the response of other aspirants to the selection.

Meanwhile, the choice of Atiku has elicited excitement at the Presidential Villa Abuja and the political camp of President Goodluck Jonathan with the belief that it would facilitate Jonathan's victory.

Presidential Spokesman, Ima Niboro said: 'We are totally excited by Atiku's selection, because this decision has made the coast even clearer for President Jonathan.'

This is just as the earlier scheduled meeting between President Jonathan and the four presidential candidates of the PDP from the North – Atiku Abubakar, former military president Gen. Ibrahim Babangida, Gen. Aliyu Mohammed Gusau, former national security adviser (NSA) and Governor Bukola Saraki of Kwara State was called off.

The meeting, initially scheduled to take place at the Defence House, Maitama Abuja could not hold following the selection of Alhaji Atiku Abubakar.

The Secretary of Northern Leaders' Political Forum Alhaji Bashir Yusuf Ibrahim who made the announcement was assisted by Alhaji Bello Sabo Abdulkadir Secretary, Consensus Committee and Senator Abubakar Mahdi Yusuf. The trio answered only three questions within 10 minutes and distributed the statement on the outcome of the selection to journalists.

'We are pleased to announce that we have concluded our assignment of arriving at a consensus candidate today and one out of the four aspirants who submitted themselves to the process has emerged. He is Atiku Abubakar.

'We are glad and proud that we have finally arrived at this outcome after several weeks of hard work and wide consultations. We are proud because of the unusual honour and extraordinary privilege given us by the four gentlemen who placed their political destinies in our hands.

'We are humbled by the strength of their faith. We appreciate their humility and cooperation. We have been reassured by all of them that they will work together to enable Atiku Abubakar clinch their party's ticket in the presidential primaries.

'We thank all Nigerians, supporters and critics alike for their views over these past several weeks. While we note these views and respect each one of them, we insist that no individual, organization or society dreaming of success and greatness can achieve these dreams without respect for others and honouring  agreements voluntarily entered into.

'This is especially so where these agreements have been transformed into a binding document, a constitution, which governs the conduct of those who subscribe to it.

'We call on all Nigerians to reflect on this. We also call on all delegates to the forthcoming party conventions to take these into account while casting votes. God bless the Federal Government of Nigeria. Thank you'.

The Guardian was told last night that one of the critical success factors of the Atiku lobby within the consensus group was the disposition of the National Assembly caucus of the northern politicians.

It was gathered  that after an exhaustive meeting in the last 48 hours in and around Abuja, the Ciroma committee had to announce the outcome to forestall alleged scuttling by a powerful lobby allegedly led by a former president who was said to have penetrated the Governors' Forum from the North. It was said that the lobby group against the forum was still strategising in Jigawa State last night when the announcement meant for today was made yesterday.

The Guardian was also told last night at press time that former vice president, Dr. Alex Ekwueme may head a panel to select a running mate. It was confirmed last night that Atiku's running mate will come from the East.