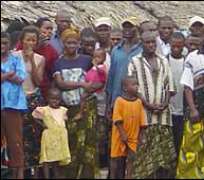 
Nigeria has handed over the potentially oil-rich Bakassi peninsula to Cameroon, bringing an end to a long-standing dispute over the territory.

The handover ceremony was moved from the peninsula's main town to Calabar in Nigeria amid security concerns.

Over the past year about 50 people have been killed in clashes.

The majority of the local population considers itself Nigerian, but an international court ruled in favour of Cameroon in 2002.

The BBC's Abdullahi Kaura in Calabar says there are unconfirmed reports that militants have attacked a boat travelling to Abana, the main town on the Bakassi peninsula.

Nigerian security sources said between three and seven people were killed when militants ambushed the boat as it made its way from Cameroon.

Correspondents say security had been beefed up ahead of the ceremony.

On the Cameroonian side, there have been celebrations as people moved back into the peninsula.

In recent years, at least 100,000 people have moved from the peninsula to Nigeria, local leaders say.

The International Court of Justice ruling was based on an early 19th century colonial agreement between Britain and Germany.

Nigeria challenged the ruling, but finally agreed to relinquish the territory two years ago.

"The gains made in adhering to the rule of law may outweigh the painful losses of ancestral homes," said the head of the Nigerian delegation at the ceremony, Attorney General Mike Aondoakaa.

Part of the territory was handed over to Cameroon two years ago.

A spokesman for Nigerian President Umaru Yar'Adua said the process was "painful... for everyone including the president", but added that Nigeria had made "a commitment to the international community and we have a responsibility to keep it".

Cameroon said the final handover would mark "the end of a crisis".

On the beaches of the northern part of the island there were parties and celebrations as Cameroonians prepared to go into the last section to be turned over to them.

"We are going straight to the place, and we're going to be happy," one reveller told the BBC's Randy Joe Sa'ah in Bakassi.

But in Nigeria there is still bitterness about the deal.

"The government has abandoned its duties," said Kayode Fasitere, the lawyer acting for some displaced from Bakassi who sought to have the handover delayed.

The transfer of Bakassi had been described by UN Secretary General Ban Ki-Moon as "a model for negotiated settlements of border disputes".

A group of Bakassi leaders have been seeking compensation from the Nigerian government.

About 30,000 of the residents have moved out to an area in Cross Rivers State set aside for them, but it has no access to the sea, campaigners say.

Bakassi has a rich fishing culture and people say the handover has destroyed their way of life.

The Bakassi peninsula juts out into the Gulf of Guinea close to the Niger Delta.

Its offshore waters are thought to contain substantial oil fields - untapped because of the border dispute - which Nigeria and Cameroon will now work together to explore.