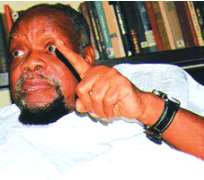 The 71-year-old Lady Umeh was buried at her Aguluzoigbo country home, in Anaocha Local Government Area of Anambra State after high mass attended by over 100 and officiated by the Archbishop of Onitsha Archdiocese, Most Reverend Valerian Okeke.

Of a special note was the large and colourful presence of the members of the Movement for the Actualization of the Sovereign State of Biafra (MASSOB) and their leader, Chief Ralph Uwazurike.

The knights and ladies of the Catholic Church, where not left out, as they took the centre stage at the burial, in honour of the departed member.

Delivering the sermon at the funeral service, held at St. Patrick's Church, Agulu-uzigbo, which was overwhelmingly attended, Rev. Fr. Christian Amaogu described death as an inevitable end, hence the need for every one to be prepared at all times, as no one knew, when, where and how one would die.

The cleric admonished Christians to lay less emphasis on quest for materialism, which often beclouded their focus on attaining the kingdom of God.

Amaogu called for true repentance and reconciliation among Christians, as a means of preparation for eternity.

Welcoming the sympathisers, Umeh, who is the second son of the deceased, described her mother as an epitome of humility, as she was ever willing to render selfless service to God and neighbours.

He, however, said that he was consoled that his mother lived an exemplary life to which many people attested and thanked Nigerians from all walks of life for coming to commiserate with the family.