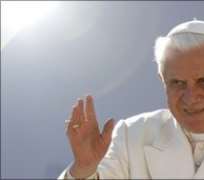 Catholic reformers and groups working to combat HIV have welcomed remarks by Pope Benedict that the use of condoms might not always be wrong.

The Pope said their use might be justified on a case by case basis to prevent the spread of HIV/Aids.

The remarks, due to be published in a book next week, mark a softening of his previously hard line against condoms in the battle against HIV, analysts say.

The Vatican has long opposed condoms as an artificial form of contraception.

This has drawn heavy criticism, particularly from Aids campaigners, who say condoms are one of the few methods proven to stop the spread of HIV.

In his latest comments, however, he said the use of condoms might be justified in exceptional circumstances.

He gave the example of male prostitutes where, he said, using condoms to prevent the spread of AIDS could be seen as an act of moral responsibility, even though condoms were "not really the way to deal with the evil of HIV infection".

This marks a significant shift in his previously implacable opposition to the use of condoms, says the BBC's religious affairs correspondent, Robert Pigott.

UNAIDS, the United Nations programme on HIV/Aids, welcomed the comments as a "significant and positive step forward".

"This move recognises that responsible sexual behaviour and the use of condoms have important roles in HIV prevention," said UNAIDS Executive Director Michel Sidibe.

The Kenya Treatment Access Movement (KETAM), which works to combat the spread of HIV, welcomed what it said was the Pope's acceptance of reality that abstinence did not always work.

"It's accepting the reality on the ground," said David Kamau, head of the KETAM. "If the Church has failed to get people to follow its moral values and practice abstinence, they should take the next best step and encourage condom use."

The Catholic reform group We Are Church said the comments showed the Pope was able to learn from experience.

'Not a moral solution'
The new book - Light of the World: The Pope, the Church and the Signs of the Times - is based on a series of interview the Pope gave the German Catholic journalist, Peter Seewald, earlier this year.

When asked whether the Catholic Church was not opposed in principle to the use of condoms, the Pope replied: "She of course does not regard it as a real or moral solution, but, in this or that case, there can be nonetheless, in the intention of reducing the risk of infection, a first step in a movement toward a different way, a more human way, of living sexuality."

Pope Benedict said the "sheer fixation on the condom implies a banalisation of sexuality" where sexuality was no longer an expression of love, "but only a sort of drug that people administer to themselves".

Although Pope Benedict reiterated the Church's fundamental opposition to contraception, and repeated his view that condoms were not the answer to curbing HIV, he added that there was much in the area of sexual ethics that needed to be pondered and expressed in new ways.

Austen Ivereigh, coordinator of the Catholic Voices group, said that while this was the first time the Pope had voiced such an opinion on condoms, it was in line with what Catholic moral theologians have been saying for many years.

"The prevalence of HIV raised the question of whether condoms could be used to prevent the transmission of the virus.

"If the intention is to prevent transmission of the virus, rather than prevent contraception, moral theologians would say that was of a different moral order."

'Lack of understanding'
But Clifford Longley, who writes for The Tablet, a British Catholic newspaper, said the development was far more significant than a nuanced change in attitude.

He said the "small concession... could easily become a collapse in the whole edifice of Catholic teaching on contraception".

"The implication seems to me to be much vaster than even the Pope anticipates," said Mr Longley.

The UK's Family Planning Association criticised the Pope's wider opposition to condom use, despite his recent comments.

Chief Executive Julie Bentley said: "The Pope's previously stated view that condoms do not protect against HIV is wholly wrong and irresponsible.

"Whilst we welcome the Pope's suggestion that he would support some use of condoms, we remain very disappointed that he implies this should only be in limited circumstances. This view demonstrates his lack of understanding that HIV can affect all people who have sex, regardless of who they are and who they have sex with.

"Thousands of people across the world trust his word, and he therefore has a responsibility to give correct information on how people can protect themselves when having sex. That means he should be encouraging and supporting condom use at all times".

The Vatican newspaper, L'Osservatore Romano, published excerpts of the book in its Saturday edition.