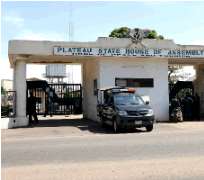 Workers in the employment of the Plateau State House Assembly yesterday began an indefinite sit-down strike over unpaid allowances, keeping the premises under lock.

The aggrieved workers had two weeks ago staged a peaceful demonstration calling on the state government to pay their dress allowances, which were0 due a long time ago.

Earlier in his address before the commencement of the strike yesterday, Chairman of Parliamentary Staff Association of Nigeria, Plateau State chapter, Jackson Bature had decried 'the go come nature' they had been subjected to over the allowances, saying they were embarking on the strike until their demands were met.

The Clerk of the House, Mrs. Helen Chung Dusu who declined to comment, had earlier during a closed door meeting with the fficials of the workers promised to ensure that the allowances were paid on Friday and further appealed to them to open the gate of the premises instead of locking everyone out.

Deputy Speaker of the House, Ibrahim Baba Hassan who addressed the workers during their last demonstration said the allowances had already been included in the budget. He said the director had made a memo, which had been signed by the speaker and sent to the executive.