WHEN STAKEHOLDERS GATHERED FOR CREDIBLE POLLS 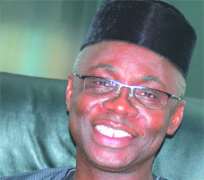 Bakare
Concerned about how elections in Nigeria have brought untold hardship instead of political and socio-economic succour to the citizenry, two socio-political groups recently organised a one day twin events where stakeholders brainstormed to proffer solution to the embarrassing situation.

The trio insisted that Nigeria must get it right during the 2011 elections to be able to remain, not only as a country, but also as giant of Africa.

Mimiko, in his opening remarks as the special Guest of Honour, spoke on Who can make votes count? He asserted that 'nothing can be more important in the national discourse in the country today than about credible election next year.'

According to him, issues about credible election was to be in the front burner of the national discourse 'if Nigeria should survive and be a country that our children would be proud of,' warning that the brigandage of 2007 should not be allowed to repeat.

He therefore enumerated the ingredients of credible election to include internal democracy within the political parties, credible voters' register, impartial electoral umpires and highly professional and impartial security agencies.

The SNG Convener, who though admitted that the Chairman of the Independent National Electoral Commission (INEC) Prof. Jega has assured the populace of credible elections next year, warned that 'we can only give him the benefit of doubt but can not trust him.'

He vowed that 'Nigerian people will not sleep in 2011,' disclosing that 'my group and other groups would embark on house to house sensitisation on the need for free, fair and credible election next year.'

While assuring that 'people would be sensitised to register, vote and defend their votes,' the vocal cleric/activist assured that 'Nigeria would witness the largest number of voters next year,' saying 'people are eager to witness credible elections and good governance in Nigeria,'

In her paper entitled: Asserting the will of the people, the CD President, Dr. Joe Okei-Odumakin urged the people to pay the price for liberty by being vigilant, warning that making votes count in Nigeria was not to be seen as a tea party.

Lagos State Commissioner of Police, Mr. Marvel Akpoyibo, in his contribution, maintained that 'security, anywhere in the world is a collective responsibily,' stating that past failure should be blamed on systemic and structural error and not the police.

Speaking on: Security of environment for free and fair election, Akpoyibo raised a poser that what should happen 'if those who should obey the law decide to disobey it? The answer, according to him, was, 'insecurity.'

He said that 'we are all stakeholders and the security duty is not an exclusive job of the police alone but we should all collaborate to secure the country,' saying 'Police have pledged to make things work next year.'

So, to guarantee security of people, property and voters' votes, the Police boss said everybody must cooperate with the Police by being law abiding, enthusing that 'after next year's election, we shall collectively beat our chests and say we have come, seen and conquered.'

Lagos State Residential Electoral Commissioner (REC), Dr. Adekunle Ogunmola, who represented INEC, re-assured that 'INEC has pledged to conduct free, fair and credible election next year just as he appealed that every Nigerian should cooperate with the commission to make things happen.

The National Executive President of the group, Goodluck Obi said Mimiko merited the award by his doggedness that led to regaining his mandate stolen during the 2007 election.

In his reaction, Mimiko thanked the organisers of the event and declared that he would like to be addressed as 'the elected Governor of Ondo state,' pointing out that there were some impostors who occupy governorship seats in Nigeria without the people's mandate.

In her lecture, democracy and good governance as weapons against poverty, Dr. Okei-Odumakin said that it was through good governance that emanated from genuine democratic process that could guarantee eradication of poverty in the country.

She therefore urged Nigerians to insist on credible election next year to pave the way for emergence of leadership that would serve the people with fear of God.

At the end of the twin events, the audience promised to go about spreading the gospel of credible election just as the participants also volunteer to enlighten the populace on the need to register, vote and defend their votes.