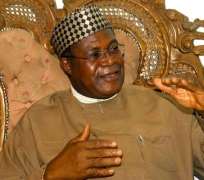 ABUJA, Nov 17, (THEWILL)- The National Chairman of the Peoples Democratic Party (PDP), Dr. Okwesilieze Nwodo on Tuesday urged Nigerian leaders at all levels to ensure that good ideas aimed at improving the nation’s economy are not allowed to die. Dr Nwodo made the call when he visited an indigenous telecom company, NetVisa GSM Secured Nigeria Limited, licensed by the Nigerian Communications Commission (NCC). The National Chairman after listening to the company Chief Executive, Engr. Prince E. Uchendu narrate how the operations of the company is suffering because of apparent indifference of the GSM network operators to the idea which if allowed to develop will check the incessant phone theft in the country. A statement from his media aide Ike Abonyi said that Dr. Nwodo urged the NCC to ensure that the good idea is not allowed to die by ensuring that all necessary impediments are removed adding that NCC should encourage this programme. "It is not good enough that this type of programme exists and am not aware and many Nigerians are not aware, whoever is holding this back from Nigerians knowing it should please act in the interest of the public,” the PDP boss pleaded. He said that it is curious that the NCC set up such laudable body to check phone thefts in the country yet it’s not doing much to bring the awareness to the populace. Engr Uchendu had earlier explained that the company is an initiative of the NCC to curtail the theft of mobile phones and ancillary crimes in Nigeria. He said that to access this service, any user that falls victim of mobile phone theft simply has to report to his/her service providers (MTN, Zain, and Glo etc) each of whom has received relevant training and interface with NetVisa through the CEIR technology. The CEO also disclosed that following the operations of the company which commenced 1st July 2009, a significant decrease in the theft of mobile phones and crimes associated with it like assault has been recorded.