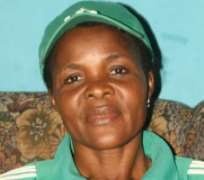 Uche
Winning the Seventh Africa Women's Championships is just enough to force Pillar of Sports, Dr.Orji Uzor Kalu, embark on long one -man trek to the the Glass House in support of coach of the moment, Eucharia Uche. Kalu vowed to muster formidable opposition against the plot to oust the cup-winning coach from her prime position in favour of a bogus technical adviser to take the Falcons to the World Cup in Germany.

'It sounds like blue murder.We do not ever learn from our past.You mean a coach whose team won the cup, Fair Play trophy, Golden Ball and Golden Boot Awards and even beat a team that was suspected to have included two men in it squad is not good enough. Maybe, because she is a woman,' Kalu screamed.

He recalled past World Cups where overhaul of the coaching crew cost the nation good results after doing so well in Africa. 'After Phillipe Troussier qualified the Eagles for France '98, we brought Velibor Milutinovic who could not do better than the team's USA'94 performance.In 2002, the same scenario came up with Shuaibu Amodu leading the run to Korea\Japan, while Adegboye Onigbinde took the squad to the Mundial.The men could not go beyond the first round,' the Abia State formergovernor said.

While admitting that there is need to work on the girls, Kalu advised the NFA to organise Grade A friendlies and also send the coach on a refresher course abroad to prepare her for the World Cup in Germany. 'Sure the team needs to move up. It is the job of the NFA to programme quality friendlies with teams such as Germany, Sweden,USA, Brazil and the Koreas. Coach Eucharia Uche should be sent to America or England to prepare her adequately for the big one,' he added.

'We all saw what returnee Stella Mbachu did from the wings.That is the typical Nigerian style. Desiree Oparanozie was so useful in the air and if not for the 'great one' Perpetua Nkwocha, Loveth Ayila would have dazzled Africa.What the coach did was to blend the Flamingos, the Falconets, with the not so young and it worked. Please, nobody should stop us from watching the sweet Eucharia Uche\ Ann Chiejine 'Nkwa Umuagbogho' dance steps on the sidelines', Kalu advised.