Farida Has No Plans To Resign As EFCC Disowns Fake Statement 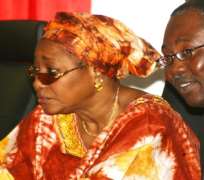 San Francisco, Nov 16, (THEWILL) - The Economic and Financial Crimes Commission (EFCC) has described as cheap blackmail and an act of desperation by disgruntled elements a widely circulated statement credited to the anti-graft agency in which spurious and ridiculous allegations were made against the Attorney General of the Federation, Mr. Mohammed Bello Adoke, SAN as well as the EFCC Chairman, Mrs. Farida Waziri.

THEWILL did not receive the fake email purportedly written by EFCC's Femi Babafemi. A statement by the Commission today accused those behind the fake statement of cloning the e-mail address of the Commission's spokesman, Femi Babafemi and using same to send their own statement to media organisations including on-line publications some of which had already published the so-called statement which was written in bad language and taste. The Commission said it wishes to disown the statement in its entirety and urge all those that may have received it as well as the general public to disregard it as it is not in any way related to the reality of things on ground in the EFCC. "The statement is just one of the numerous antics of crooks to set the office of the AGF against the EFCC in their desperate bid to cause confusion and disaffection between the two personalities heading the two public offices. They have tried this before now by sponsoring various publications attacking either the AGF or the EFCC chairman as a ploy to create the impression that such publications were sponsored by either of the two officials against the other. "We wish to assure the masterminds of this criminal act that this is yet another of their failed plots to want to escape justice using all manner of crooked means. If they have failed to deter us from continuing their investigation and prosecution by killing and maiming our officials, sending of bomb threats and others, then their latest antic of trying to set the AGF against the EFCC will equally fail. "We wish to emphasize that the EFCC chairman is not contemplating resigning her appointment on a non-existent ground that the AGF is interfering with the work of the Commission. The support of the AGF for the anti-graft agency has in no small measure helped to facilitate the recent successes recorded in the war against corruption especially some high profile convictions recorded by the EFCC. "We also wish to assure the criminal minds behind the latest plot that we will continue to work with other security agencies to trail and track them no matter who they are", the statement stated.”