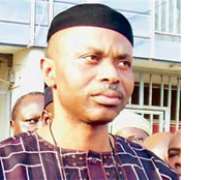 Ondo State governor, Dr Olusegun Mimiko at the weekend x-rayed the pitiable condition of federal roads in the state and examined the score card of the Federal Roads Maintenance Agency (FERMA) in fixing the roads and dropped a bombshell: FERMA is a


A visibly angry Governor Mimiko who could not stomach his disappointment at the poor handling of the federal road projects while welcoming the Presidential Projects Assessment Committee led by Dr Oluwole Oluleye, lashed out at the Agency's officials working on some of the roads saying: 'it is not an exaggeration that there is no single federal road that is good in Ondo State and our government had to, in the past 18months or so, carry out works on federal roads when we could not bear the series of loss of lives occasioned by the Agency's lack of commitments to its primary duties.

Mimiko equally described the situation of the Sagamu-Ore-Benin express way as very deplorable urging the federal government to urgently carry out a complete reconstruction of the road before the Charismas and new year festivities to enable people going to the eastern and Northern parts of the nation to do so unimpeded.

The first knock received by FERMA whose officials were shell-shocked by the verdict and actually became uncomfortable on their seats at the Banquet Hall of the Government House, venue of the meeting from Governor Mimiko was on the poor rehabilitation works currently being carried out on the 10-kilometer Akungba-Ikare section of the Owo-Ikare-Arigidi-Omuo highway which he described as not only ridiculous, but utterly scandalous and a shame.

'I have been to the Akoko area of the state about four times recently and what I saw as rehabilitation works on that portion from Akungba to Ikare was appalling. What do you call those iron rods? The one you are using on the sides? I am not an Engineer, but the size of the iron rods that I saw officials of FERMA using as reinforcement look like mosquito nets. This is ridiculous and scandalous, this reinforcement on Akungba-Ikare road is an engineering fiasco; the mere vibrations of heavy duty vehicles on the road will make the road collapse very soon after completion.

'If we spend money, we should spend it right, we should not say that because money had been earmarked for projects and should be spent anyhow as it is increasingly becoming the fad. You can still make amends because the present work is vulnerable to collapse. Why we are bothered is that we want to award the contract for the road and do asphalt overlay on it as we can no longer tolerate the loss of innocent lives on our roads be they federal of state roads. We don't want a situation that you will do that road and in another one month, there is trouble again because it strategic to us.

'Again, I am not an Engineer, but I believe Federal Government should do a complete reconstruction of Shagamu-Ore-Benin road. If something is not done on that road, Christmas is coming now when our brothers and sisters would be traveling to the Eastern and Northern parts of the country, do whatever you can do in the next one month especially on this Ofosu section. It is not yet Christmas now, people are staying overnight on the road, many commuters may stay there for four days during Christmas period because of the repair works going on there and the volume of traffic.

'The Owo-Akure-Ilesha road is also an eyesore. Because of the frequent incidence of motor accident on this road, we were very concerned about how to reduce the rate and save lives; my government did constructed shoulders at the areas where accidents occur regularly. The diversion of traffic caused by the bad condition of federal roads to our roads is a big problem, within a month; Ilara road went under due to the diversion on Akure-Igbara Oke. Look at Ipele road, if you don't take precaution, within the next few months our road which traffic has been diverted to will go under due to the volume of traffic.

'Arigidi-Okeagbe-Omuo road is also a problem, we don't know whether it is the problem of fund or it is the contractor, it is perhaps the only major rehabilitation project that we see, again the work is very slow, please help us fast track it' Mimiko told the visitors.

The governor equally offered the team an advice on how to ease the burden of bad roads on both Federal and State governments saying the way out to was to restructure the nation's road policy.

'It should be noted that more than 80 per cent of petroleum products getting to Abuja pass through Ondo State . Ultimately, I think the Federal Government can't cope the way it is structured now though it has the resources. Ondo State is just one of the 36 states, the roads in other states are also calling for attention, and I think we should restructure the policy on roads, devolve the resources to states for the job of making our roads passable.

Earlier. the leader of the Presidential Projects Assessment Committee, Dr Oluwole Oluleye, had intimated the Governor of the intention of his team to visit federal roads in the State in continuation of their visit to such roads in the entire South West preparatory to ensuring that they are mended and made motor able especially with the advent of the dry season.

The team, with officials of the Ondo State Road Maintenance Agency (OSARMCO) later visited Ofosu and the Sagamu ends of the Benin Ore-Sagamu expressway before their departure