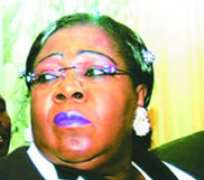 The interim order made by Justice Candide Johnson followed an exparte application argued on behalf of the applicant through Chief Robert Clarke (SAN).

Okereke-Onyiuke had in the affidavit of urgency filed in support of the motion said she had gathered from her informants that the respondents had concluded arrangements to procure her arrest and detention based on a report which was purported to indict her of wrongdoing.

She said, she was not given an opportunity to be heard. 'Rather than invite me to make my defence or at least give me notice of the pendency of inquiries into my tenure in the Nigerian Stock Exchange, the respondents delivered their 'findings' under the pretext that it had been procured through the legal process,' she alleged.

She averred that the failure of the respondents to call her attention to issue of wrongdoings was purely malicious.

'I now know very well from my sources that the respondents are making preparations to cause my arrest for the purpose of embarrassing me and smearing my credibility in furtherance of their scheming,' she averred.

In similar proceedings, Chief Clarke also obtained orders restraining the Commission in respect of two applications brought by Uzoma Henry Onyekwuru and Yinka Idowu, praying the court to restrain the Commission and four others namely the NSE, Messrs Aluko and Oyebode and Messrs KPMG Professional Services from publishing the report.