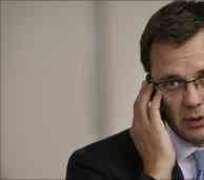 Andy Coulson denies knowledge of hacking
A file of new material related to the News of the World phone hacking scandal has been submitted to prosecutors.

The move comes after the Conservative Party's communications chief, Andy Coulson, was interviewed earlier this month as a witness.

The former News of the World editor denies knowing about the hacking, which led to one journalist being jailed.

The new material consists of statements from people seen by the police following the publication of new allegations in the New York Times in September, as well as reports by other media.

A CPS spokesman said: “We can confirm we received a file in relation to allegations of phone hacking.

“We will consider the file and advise the police in due course.”

On 5 November, Mr Coulson was interviewed as a witness by police at a solicitor's office in London.

Four people were interviewed under caution.
The New York Times reported claims the hacking activities had been more extensive than previously admitted.

Politicians and actors
In 2007, the News of the World's royal editor Clive Goodman was jailed for four months for conspiracy to access phone messages which had been left for royal aides. A private investigator, Glenn Mulcaire, was jailed for six months on the same charge.

Mr Coulson quit as editor after Goodman was jailed, and when he appeared before MPs in 2009 he said he did not “condone or use” phone hacking.

Chris Bryant, a Labour MP who believes he was a victim of hacking, is seeking a judicial review to force public disclosure of the names of the approximately 3,000 people whose telephone messages were allegedly intercepted by the News of the World.

Others said to be taking part in the legal action include the former deputy prime minister John Prescott and the actress Sienna Miller.

The Commons Home Affairs Select Committee is conducting an inquiry into phone hacking and the police response to allegations.